“So many remnants from a past era of greater wealth are scattered through out this desolate land. “ 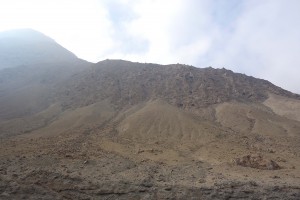 I will continue to show you more of this part of the world since I do not think you will find yourself here.

The road we took into Antofagasta ran west from the interior. We traveled through arid land dotted with hills both natural and man-made. The hills slowly eroded away into sand. 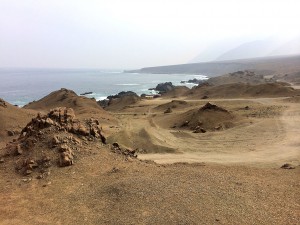 It was beautiful in its starkness. 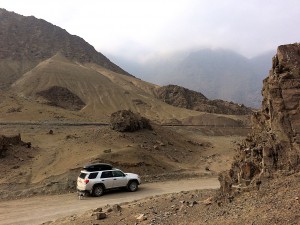 For miles and miles all you can see is sand, rocky outcroppings, salt flats, and ancient lava fields. 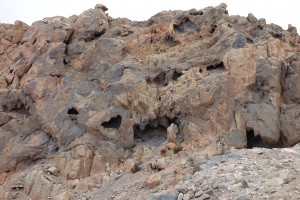 The lava fields were either crumbling lava that was difficult to walk on or some interesting lava bubbles. 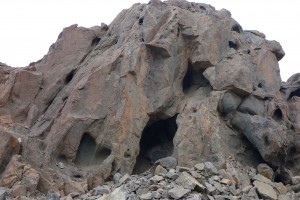 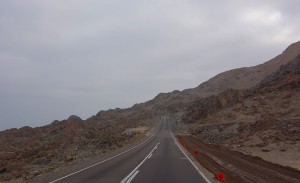 The road we took leaving Antofagasta ran north along the coast. Here the lava fields ran into the ocean. As I mentioned, this did not leave nice beaches for tourists. 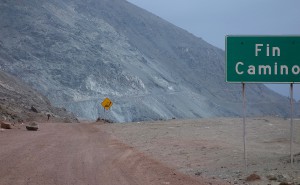 A day-trip took us south along the coast where the road came to an end. We drove it as far as we could. 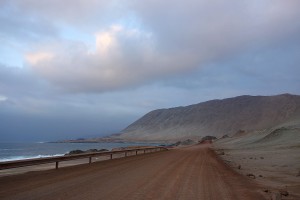 On the way back to Antofagasta we saw a small industrial town tucked into the shore.You can see there was little room left for buildings between the rocky ridge and the ocean. I can’t remember, but the industrial plant may have had something to do with mining. Or, it may have been a water desalinating plant. The water in Antofagasta is not potable. 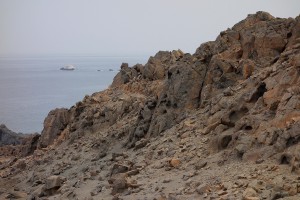 The road cut was the only thing that broke up the lava flow into the ocean. 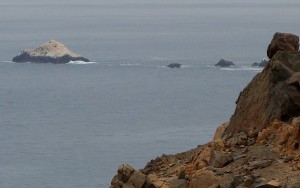 Notice the white island off shore. That is a guano island. Guano was once a source of much wealth brought to this area.

Guano is poop. It can be from bats or birds. It turns out that guano is a very effective fertilizer with its high content of nitrogen, phosphate, potassium and other nutrients necessary for plant growth.

It had been used by early civilizations, but was rediscovered in the 1800’s by the rest of the world. The islands off the coast of Chile and Peru were mecca for the highly prized poop from birds that ate fish. The lack of rain baked this bird poop, essentially preserving the nitrates from evaporating. The poop from millions of birds over 100 to 1000 of years created islands with guano as much as 100 to 150 feet deep. 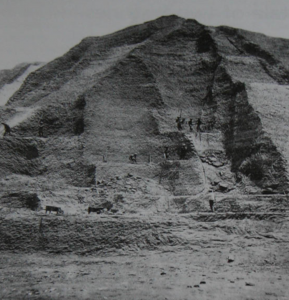 The British established trade first. Eventually, the US congress passed The Guano Island Act of 1856 to help American companies compete in the Pacific and Caribbean. This gave American entrepreneurs the ability to claim a guano island in the name of the U.S. government. These islands were later released when the guano trade declined.

Peru especially, but Chile too, saw considerable profit from the guano trade. But the majority of the wealth went to a few individuals. The indigenous population was exploited. They were used as laborers; shoveling guano onto boats destined for North America and Europe.

Towns were created. Some of the wealth was used to build huge mansions along the coast.

In 1909, the Germans developed a synthetic fertilizer . . . ending the Golden Era. 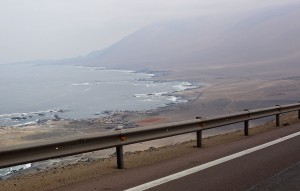 The trade still continues on a much smaller scale. A few individuals still completely depend on the guano to make a living. To the left is a tiny compound working the guano trade. Unfortunately, with the warming of the earth’s oceans, many fish in the area are dying. Since fish is the food source for the birds, their numbers are affected too. Less birds, less poop. 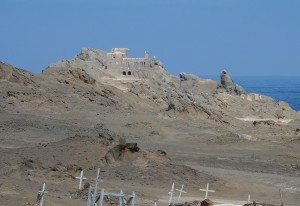 With the decline of the guano trade, mansions were abandoned and eventually some towns ceased to exist too. 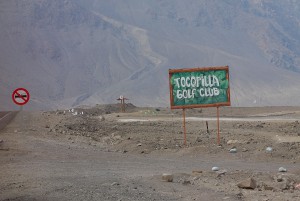 But you can still enjoy a game of golf. This golf course must hold the record for having the largest sand trap. 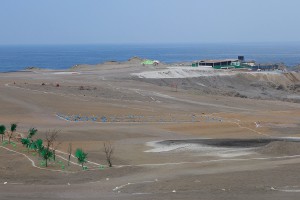 A little green paint to simulate grass. A handful of plastic palm trees. And blue markers probably meant as a “water” hazard. 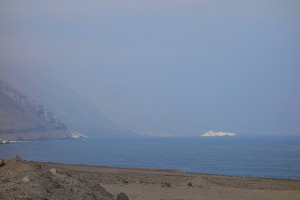 And of course a guano island. 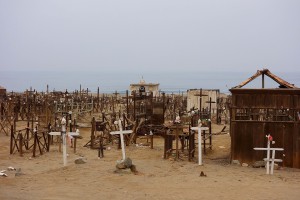 We came across a number of cemeteries. Possibly all that remains of a once prosperous town.