“This place is incredibly desolate. The drive here crossed TOTALLY barren land . . . No plants, No animals, No birds . . . nothing but the occasional abandoned town.” 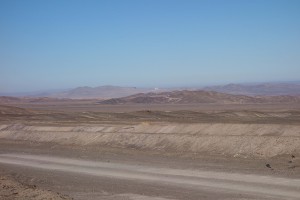 Unlike our last few moves, we had a very long drive to Antofagasta. We slept one night in The 4Runner Hostal in Calama. 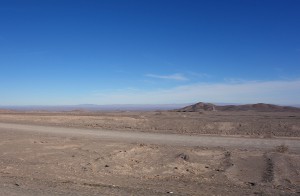 The drive seemed even longer due to the lack of anything to look at besides gray dirt.  The nothingness went on hour after hour. Towards evening on our second day, we crossed a ridge and realized we had arrived at Antofagasta.

Antofagasta is another port city. It is actually the second largest city in Chile with a population of 345,000. It is 700 miles from Santiago. Also, it has the highest per capita GDP of Chile. This is due to mining. Copper and other minerals are mined from the Atacama Desert in Chile and Bolivia.

In 1868, a couple of Chileans asked Bolivia for mining rights after finding rich deposits of saltpeter (nitratine, not to be confused with nitrate). Their request was granted.

In 1873, Bolivia signed a secret treaty of defense alliance with Peru. This treaty forbade Bolivia (without first getting Peru’s approval) from signing a treaty with Chile.

However, the following year, 1874, Bolivia did sign a treaty with Chile. One point within the treaty  stated that there would be no new tax on Chilean capital for 25 years.

However, claiming the 1874 treaty was not valid yet (since it had not been OK’ed by congress . . . yet), Bolivia enacted a 10% tax on Chilean capital. The validity of this tax was argued back and forth, but in the end Bolivia decided to enforce it. Not good.

The result? Chile invaded Bolivia and seized a chunk of land including Antofagasta. When the War of the Pacific ended (1879-83), Antofagasta remained a part of Chile. This cut  Bolivia off from the coast. However, Chile did allow Bolivia continued use of the port. In addition, in 1904, a new treaty was drawn up in which Chile agreed to build a railroad to allow free movement of goods. This railroad has remained a vital part of Bolivia’s transportation, especially during the Golden Nitrate Era, (or the Golden Guano Era). More on that later. 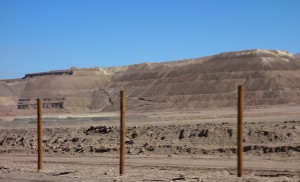 Today, Antofagasta is mainly a mining town. It’s main export is copper. Not many tourists come here to stay. Like I said, it is VERY desolate. Travelers pass through on their way to San Pedro de Atacama or Copiapo. 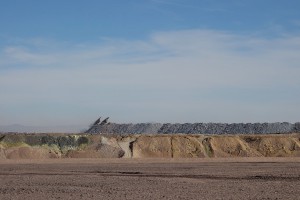 Many miles before reaching Antofagasta, we noticed the multi-tiered hills created by mining. If you look close, you will see two dump trucks dumping slag, the refuse from mining. The pyramidal hills are layer upon layer of mining debris. 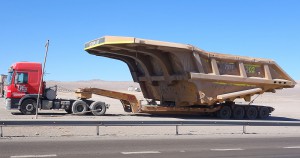 These dump trucks look small on the mining mesas, but in reality they are huge.

The Atacama Desert is the driest non-polar desert in the world. The average rainfall  is 0.6 inches per year. Antofagasta has not had rain in 4 years. Some areas have never received rain. Research suggests that parts of the Atacama Desert have a hyper-aridity that has lasted the last 200 million years.

Looking around, all you see are sand, rocky terrain, salt lakes, and old lava flows.

Yet, though it never rained, most mornings we awoke to a heavy marine fog. It has to do with the cold Humboldt Current. It creates high humidity and thus fog. Enabling the growth of a few algae, lichens and even some cacti. 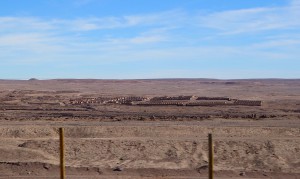 Mining towns are created, used until the mine plays out, and then abandoned. These ghost towns litter the desert.

There are no natural beaches since the shore is very steep and rocky. So, not much to attract tourists.

I am posting many pictures of this area because even if you visit Chile, I doubt you will come here. This is a chance to let you experience a part of the world you may never see. 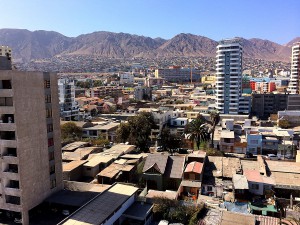 The city of Antofagasta is situated between a rocky ridge and the ocean. This is the view looking inland, you can see the ridge. 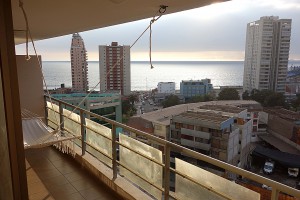 We could see the ocean from our apartment. 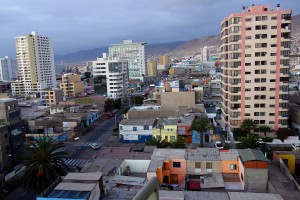 A bit more to the right and you could see the end of town down the coast. The rocky ridge curved toward the coast. 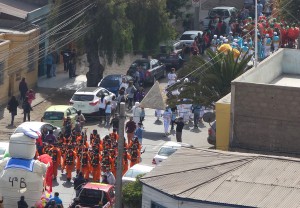 Entertainment: The street was closed to traffic. For the next 45 minutes, we watched a parade of students dressed as characters from Ghostbusters . . . 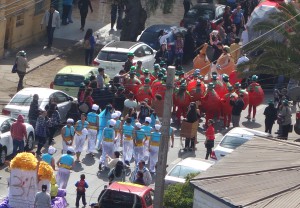 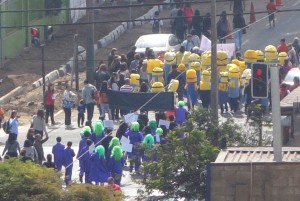 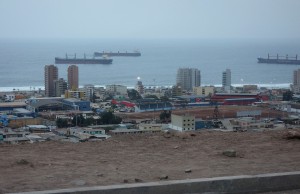 We climbed up the rocky ridge behind us and looked down at Antofagasta. The port had a continual flow of ships loading and unloading. 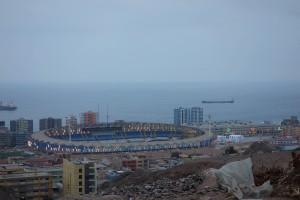 Of course, no place is complete without a huge, beautiful soccer stadium. 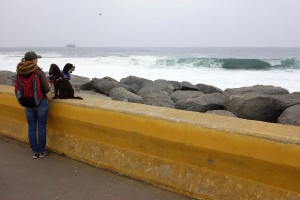 We frequently took walks along the boardwalk. Most days were cloudy, windy, and cool. 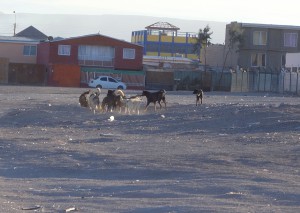 We had to keep a close eye on the dogs. A single stray was not a problem, but occasionally they would form into a pack. 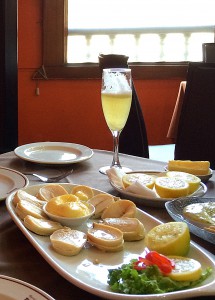 We found a pretty good sushi place that was known for making you wait over an hour, but the sushi was worth it. One of my favorite dishes was abalone; perfectly prepared, not rubbery. 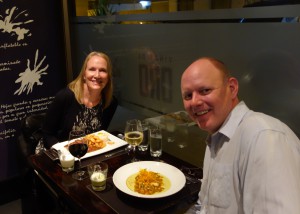 We celebrated our 9th Anniversary. 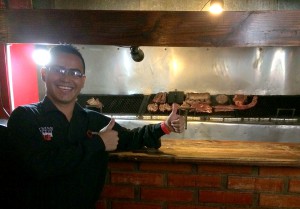 How can you say no to this grill master? 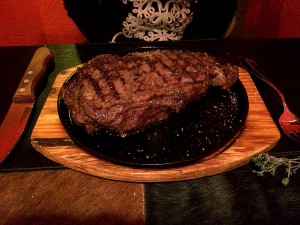 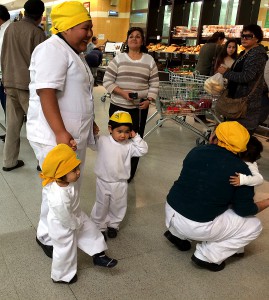 I’ll end with an adorable picture we snapped at the market. Baking 101 for little kids. So Cute!