“The scariest road we have been on so far. Would hate to drive it after dark. Arrived at Caleta Tortel just as the sun was setting. We are spending the night in the car, in the freezing rain, at the edge of a strange little town, at the edge of the world. Had salmon for dinner in a ladies home/diner. “ 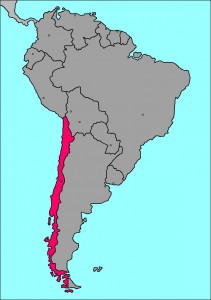 We drove like mad men to the border. A few days earlier a guy informed us that the border may only be open for a few hours a day, poosibly due to a workers dispute. Even border agents go on strike – strikes are very common.

We had chosen a remote border crossing north of El Calafate. The road to the border was extremely rough. Since we were in a hurry, it made for one crazy drive. The car’s KDSS suspension definitely helped soften the washboard effect.

The border station leaving Argentina was the smallest we would encounter on the entire trip; a tiny house with a 3 by 4 foot table and 2 chairs. We just signed a book and got our exit stamps. We were in and out within minutes. 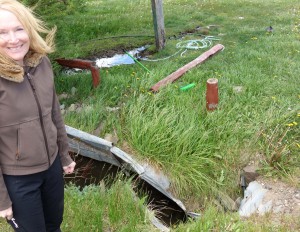 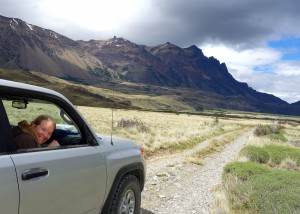 The station for entering Chile was a few miles down the dirt road. I wonder who owns the land in between? The border agents were confused over some of our paperwork, we realized this would take some time. Chris went out to move the car so other cars could get through. Unfortunately, he drove into a big hole hidden by tall grass. The passenger side mirror exploded! Luckily, no other damage was sustained. The next time we returned from the USA, we brought back a replacement mirror. 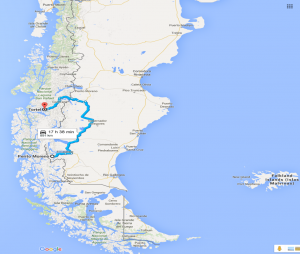 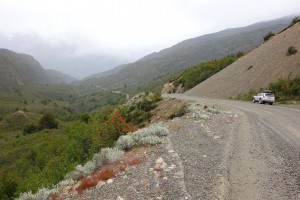 Once we had our Chilean visa stamp, we headed south on the Carretera Austral (Hwy 7). This 620 mile road was completed in the 1980’s. It was the first solid passage linking the isolated villages of Chilean Patagonia. Before completion, all travel between villages was done by water. 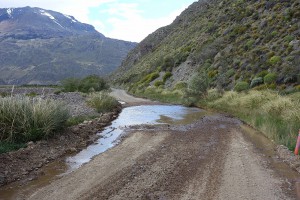 This is the only road. It was slow going, you had to look ahead for wash outs. 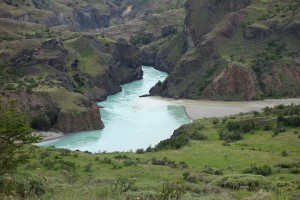 Rivers crisscrossed the landscape. The tiny hamlets along the way have retained their local character: very laid back.

The Carretera Austral does not see a flood of tourists; it takes extra effort to reach this distant land. It was carved by glaciers and still contained by glaciers. The road of the Carretera Austral only extends as far south as Villa O’Higgins, then it is blocked by a massive glacial barrier of the aforementioned Southern Ice Field. The glacier we walked a few days ago is just across the mountains and a bit south. Glaciers carved out a captivating coastal area with high mountains, rivers, fiords, and islands. We drove as far south as Caleta Tortel, a small fishing village. We arrived at sunset. 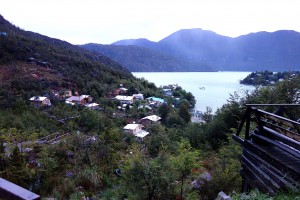 Caleta Tortel is a charismatic village of boardwalks. There are no roads in town. 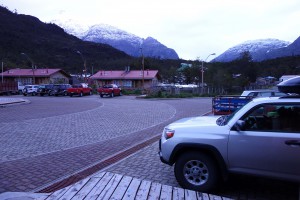 You pull into town, parking on a small paved area. From here on, you walk the raised wooden walkways. The entire town is connected with these walkways. 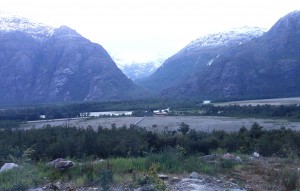 Even their tiny airport is bridged by a long wooden walkway over the shallow waters. 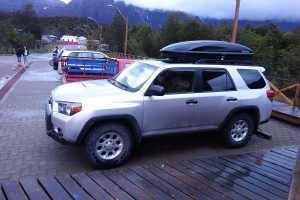 Our bed for the night; the 3 by 6 foot space in the back of the car.

Weather is volatile, often cloudy and windy. We woke to snow the next day. Ferries cruise the water linking Caleta Tortel to the rest of Chile and to the last segment of road to Villa O’Higgins. We wanted to take a boat trip through the fiords, but it was too foggy to see much. We met a few hikers willing to brave the elements. 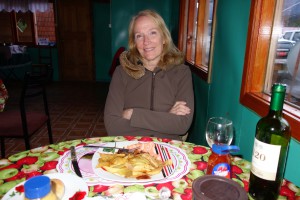 Our dinner was the most delicious, fresh salmon in a lady’s dinning room/diner. Her toothbrush was in the bathroom sink!