“Our springtime drive, all the flowers were blooming. We are staying outside of Chaitén. The town was almost completely destroyed by a volcano in 2008. Lots to do here: whitewater rafting, climb the volcano, visit tiny parks. The week will go fast.“ 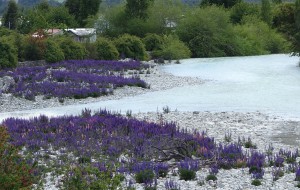 I still get confused with seasons. It is December and springtime. Mother nature granted us a colorful drive lined with purple, pink and yellow flowers. 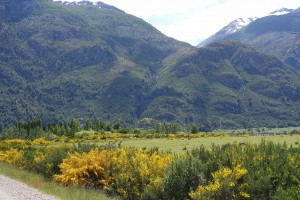 We ate lunch in the quaint little town of Puerto Aisén. I am in heaven eating stone crab (jaiba) so often. After lunch took a bridge across the Fiord Aisén to the sister village of Puerto Chacabuco. 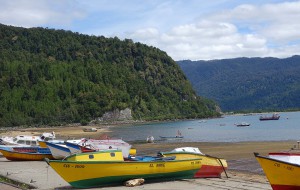 We stopped for lunch in the town of Puerto Cisnes. A colorful fishing village. Of course, we had fish for lunch.

There was a ton of road construction, frequently slowing us to a crawl. The good news is that this road will be better next year.

We had a scare when we stopped to stretch our legs. Like us, the dogs were taking care of business. Apparently, we had not noticed we had company. We looked up to see Sedona nose to nose with a huge bull. Fortunately, they were both just curious. 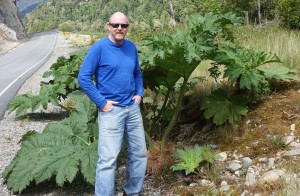 This is rhubarb! We often passed locals collecting it. 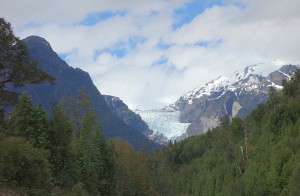 We realized we were still in the Southern Ice Field when we saw this glacier rippling down the mountain side. 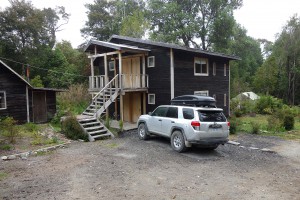 Our new home for a week was at Posada Kahuel, located on the far side of Chaitén. We had the lower level. We were disappointed to find out there was no internet, but all was forgiven when we got to know our charming host, Horacio.

Horacio also provided us with excellent meals. My favorite was abalone. Also the water from the tap was drinkable since it is naturally filtered to incredible purity. 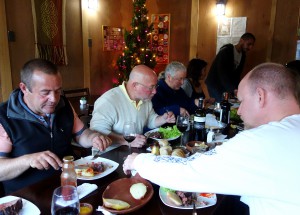 We were guests at a party celebrating the start of another rental cabin. This place was one of only a handful of lodgings open for business after the volcanic eruption in May 2008 of the Volcán Chaitén, just 6 miles from town. The town was pretty much wiped out. No electricity, no water. Most of the 5000 residents moved away. Horacio was one of the few who remained. He tells great stories. One day, he set up his generator in the ash-covered yard. Later in the day he returned to find the generator was gone. Looking closer, he could see where the vibrating  generator had sunk into the a ash. When we arrived, the electricity had only been restored 6 months earlier. The government did not help much in rehabilitation. Too many other disasters. They did offer to move the town – in fact, it says they did on Wikipedia. Guess they forgot to tell everyone. 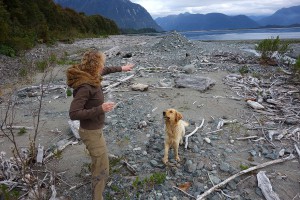 Horacio’s dog joined us on our walk through his property to the beach. 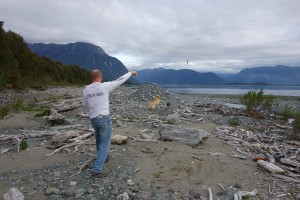 We got to know Javier Alejandro Gallegos Mattey, the owner of El Quijote Restaurant, one of a handful of restaurants still open in town. Javier had internet, delicious food, and great company. Javier’s son is a famous kayaker named Alejandro Javier Gallegos Niera. 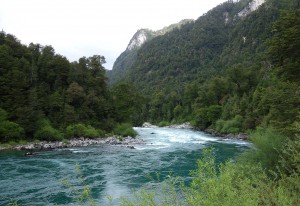 An hour and a half (about 100 miles) from Chaitén is the town of Futaleufú, population 1800. It took us longer to get there since we took a wrong turn. Much of the signage still has not been replaced after the volcanic ash fell. 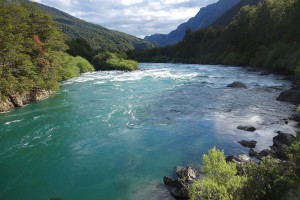 Futaleufú is world renown for its white water rafting and kayaking. We booked a Class 4 trip. We had a terrific guide from New Zealand who kindly reran one of the best parts 6 times. The icy water was breathtaking and so was the ride. 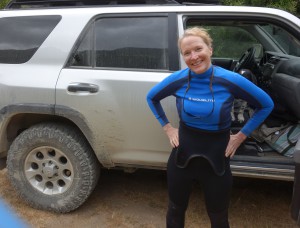 I was grateful for my multi-layered, full wet suit.

A second guy manned a rescue raft that duplicated our every move down the rapids. 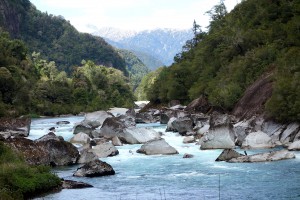 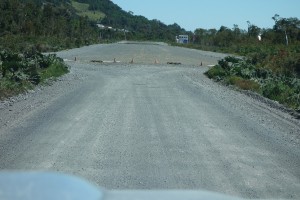 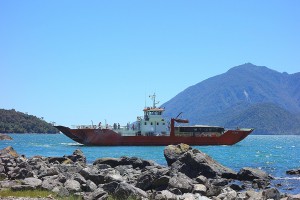 Another airport runway/road. The road went to the left. It was separated from the landing strip by a 3 inch ridge of gravel.

We did a day trip to Coleta Gonzolo. The road ends at a tiny port surrounded by mountains. This 70 foot ferry left from here each day. 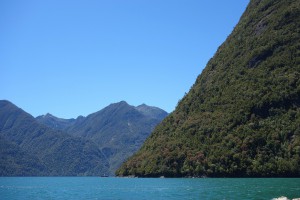 If you look real close at the base of the green mountain, you will see the ferry. This gives you an idea of how impressive the fjords felt. 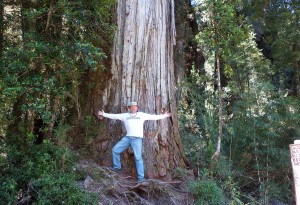 We did a short hike into the Sendero de Alerces. These trees are 3000 years old. They reminded us of the California Redwoods. 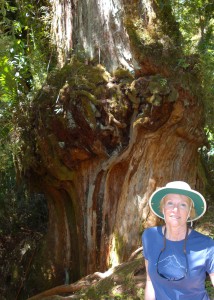 Even the knots in the trees were gigantic.