”We rode the ferry yesterday to the island of Chiloé. Especially after the gray ash of Chaitén, the plush green hills of the island looked very inviting. Love our palafito! I already know this week will go too fast.” 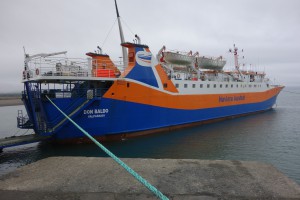 So many people had dreamily mentioned Chiloé Island, we were anxious to get there. We hopped a new looking ferry out of the tiny, relocated port of Chaitén and crossed the Gulf of Ancud.
The 5 hour ferry ride was very comfortable. The large ferry had an underbelly for the cars, a deck to walk on, a spacious lounge with airplane seating, and an assortment  of food and drinks were available. Other ferries run different routes in the summer, but they were not open at this time of year. One of those goes from Chaitén to Castro. Since Castro was our destination, we might have taken that one. However, we are always glad to drive and see more area. 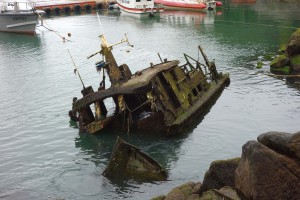 We saw this next to the ferry at the Chaitén port, wonder if it sunk due to the volcano. 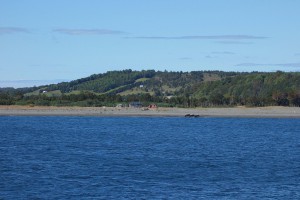 As we pull closer to Chiloé, we could see the lush,rolling green hills, lighter areas marked cleared farm land. 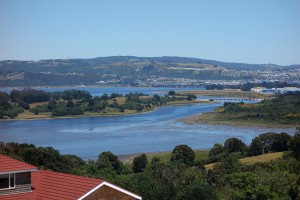 Chiloé is the largest island of an archipelgo made up of more than 40 islands. Chiloé is 112 miles long and 30 miles wide. Its 155,000 inhabitants make a living from tourism, agriculture, and fishing. 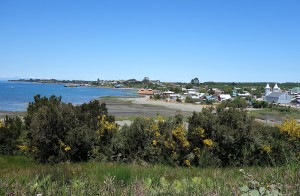 Tourists are drawn to an island still steeped in the old traditions where myths of ghost ships and witches still endure. You can get pictures of some lovely old wooden churches; we can’t believe we did not take any.
The ferry landed at Quellón, a rather dumpy industrial port at the southern end of the island.
Interestingly, Quellón marks the end of the Pan-American Highway. You know – the highway that stretches from Alaska, down through Canada, the rest of the US, Mexico, Central America (minor interruption at the Darién Gap), and South America. At the southern end of Chile, you take a ferry to the island of Chiloé, travel to it’s south end (Quellón) where the road meets the water, and the Pan-American Highway ends. We have met a number of people whose goal was to drive the Pan-American Hwy from end to end. The past few weeks we have been driving the Carretera Austral, the road after the highway ends.
We drove our car off the ferry and headed to Castro, a little over half way up the island. Home to  34,000 individuals. We booked one of 4 rooms at a lovely blue palafito. 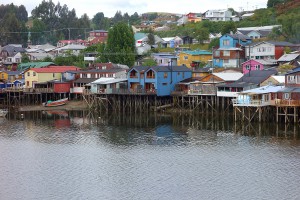 A palafito is a wood-shingled house perched on stilts over the water. 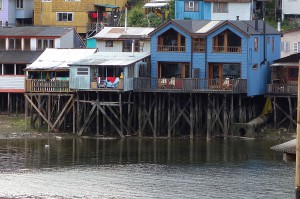 We are in the upper right of the blue house.. 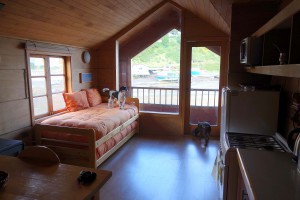 Talk about being near the water, we were over it. There was a bedroom at the back of the building, but we preferred this bed where we could wake up to a view. 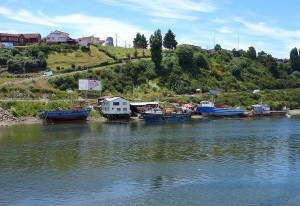 Across the bay, we could see colorful fishing boats. When the water was low, they rested on their sides. 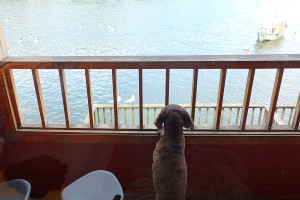 Sedona and Apex spent hours watching the gulls perching on the rails or the swans swimming in the bay. 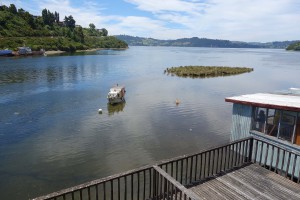 The water level rose and fell during the day. When the tide was in, the little boat named “Starfish” floated and went out. 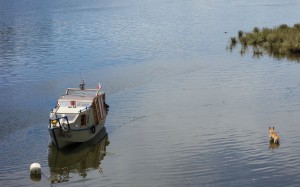 Even when the tide was in, the bay was shallow. This dog had no problem walking to the tiny island to play with the swans. 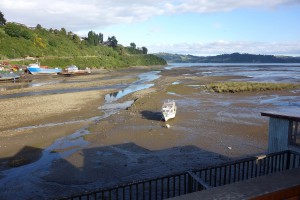 When the tide was out, the Starfish was grounded in the mud. 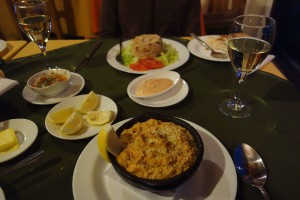 My favorite local dish was Chupe de Jaiba, Stone Crab Casserole. I ate it as often. 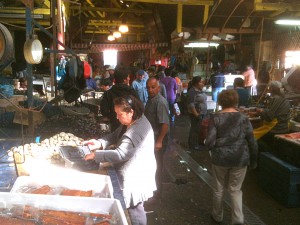 We found a farmers market where we bought a large plastic container (4X4X12) filled with stone crab meat. It was inexpensive. It actually was more than we could eat. 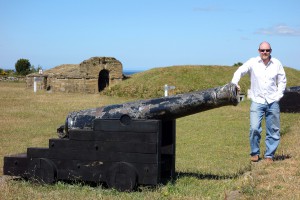 We visited Castillo San Miguel de Ahul: an old fort. Most of the buildings we gone. One that remained was the armory (behind Chris). There were a handful of cannons. 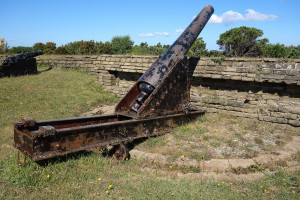 This large cannon could cover a wide area. The wheels on the arm of the cannon could be rolled along the trough, pivoting the cannon so it could fire on ships attacking from many directions. 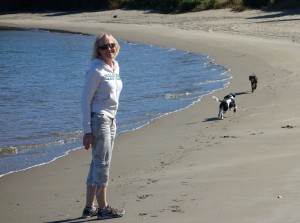 Of course we spent time on the beaches with the dogs. 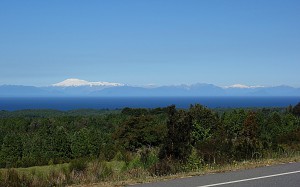 Looking back across the Gulf of Ancud, we could see our previous home of Chaitén.
We ate oysters at the town of Caulín, located at the north end of the island. The owner could trace his family back hundreds of years. He was quite the story teller. The oysters here we delicious and fresh, right from the bay. These particular oysters are only available here and in New Zealand. 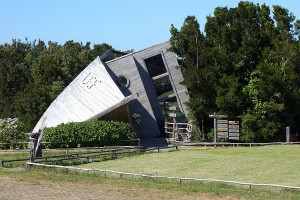 I fell in love with this restaurant, LEF. First, how cool that it was built to look like a ship resting on it’s side. Second, the waiter convinced me to try eel, something I had tried once before in Belgium and hated. He promised me another meal if I did not like the Conger. I loved it. I guess the lesson is to be open to a second try. We were the only guests, so we had fantastic service. The grounds are expansive and worth trekking around. They have gorgeous, but expensive lodging. If we had a bigger budget, I would not hesitate staying here. 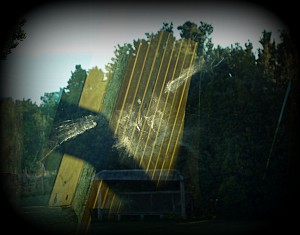 I have to include this photo. Apparently a bird ran into the window. You can see not only the imprint from his wings and body, but even his beak! That was one dusty bird!
On our way to dinner, we used our tow strap for the third time at a sandy beach . . . still have not needed it ourselves. 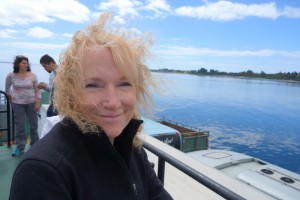 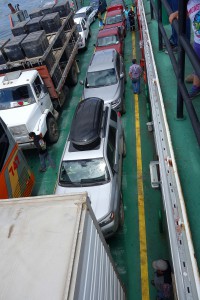 The dogs stayed in their “room”.

Our week ended and we took the ferry out of Chacoa at the north end of the island. This ferry was smaller, an open top carrier with a small snack bar, oh . . .and Wi-Fi. It was a short (windy) trip to Pargua on the mainland. We learned we had been quite lucky to have as many sunny days as we did.