August 16, 2013
“We arrived tired but excited to ski Catedral. We have heard very good things about this place. It is the largest of the three. Once again, we are in a teeny, tiny room. I miss the space we had in San Martin. We are downtown so we can walk to most places. The ski resort is about a ½ hour drive.”
Our final ski area was Catedral, outside the town of San Carlos de Bariloche: usually just called Bariloche. It is the largest city (about 100,000) in the Lakes District, thus you will find it on most maps. It is teeming with tourists both summer and winter. 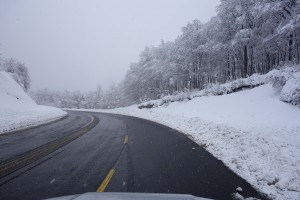 The drive took us longer than we expected. The distance was not great, but a large section of the road was dirt. Add a mountain pass with snow, and it became a long drive. 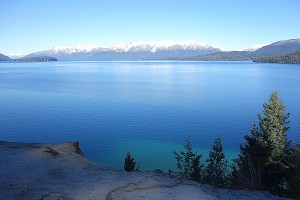 The road, known as “Ruta de Siete Lagos” or Seven Lakes’ Road, took us around lakes of all sizes. Giving us tantalizing views of the snow-capped mountains.

The wind dies to a whisper . . . the lakes turned to glass. Each lake offered a mirror image of the shoreline and hills behind. 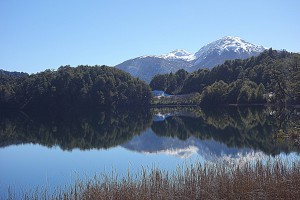 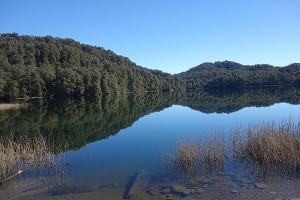 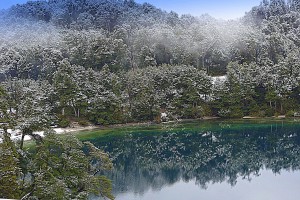 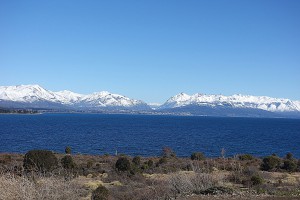 Finally, we reached the large lake called Lago Nahuel Huapi. As we approached the shore, we could see Bariloche tucked in between the lake and the mountains. With the sun out in full force, the lake was a bright blue. Way above Bariloche stood mountains that gave the ski area it’s name, Catedral. Named by early explorers for the brown, granite spires at the crest of the mountain recalling to mind the image of a cathedral.

Moving into our tiny apartment was challenging. We had to unload all our stuff in the lobby, dogs included. There was no parking available for our vehicle and the police were not happy having us hold up traffic. We worked fast. Once unloaded, Chris went to find a place to park. Eventually, we paid for a space at a nearby parking lot.

Our apartment was tiny. Perhaps not as miniscule as we had at Las Leñas, but it was a tight fit. We did have a small kitchen, though. Good news since we were here for 6 weeks.

As soon as we had moved in, it was time to explore. Stepping out of the front lobby onto the busy street, we leashed the dogs and set off to find “green” space for them. What we saw on the maps was actually up an incredibly steep hill. As it turned out, they regularly learned to do their thing at a small grassy strip — about 4″ wide — at a lot under construction. 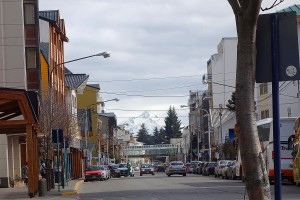 Looking down the busy street (San Martin/Francisco P. Moreno) in front of our apartment, it framed the mountain ski area in the distance. 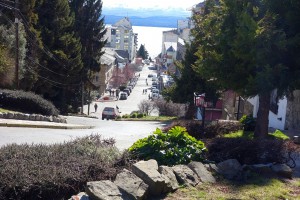 We found a short piece of a street we called Lombard street after the famous street in San Francisco. As with the famous street, our street wound back and forth down a steep hill. We eventually drove down it. Can’t imagine doing it on an icy day.

When hear people speak about the Catedral ski area, you most often hear them rave about the incredible view from the top. Unfortunately, the town itself was a bit disappointing. Poor city planning had allowed individuals who owned the land along the lake shore to erect tall buildings. This essentially blocked the view of the lake for the rest of town. That was one of the things we had loved about San Martin. San Martin had better rules (or enforcement). The town was set up for tourists with the idea that the views were to be enjoyed by many. Bariloche’s city planners, or lack of planners, gave the view to a few, not the many. The only way to see over the annoying wall of buildings was to rent a place up the hill. Overall, Bariloche felt closed in. 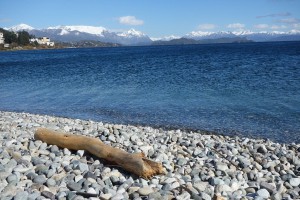 We would walk down to the shore between the buildings to enjoy the lake view . . . it was spectacular. 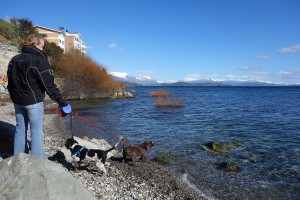 Sedona still had issues with the moving rocks.

Our apartment had no view. We did have a window, but it faced away from the lake into a hillside and we were behind “the wall”. But, it was inexpensive compared to most places. We were here at one of the high seasons.