October 1, 2013
“We had one of our longest drives so far, but, we were rewarded with a room-with-a-view of whales off the coast. They are quite far away, but you can still see black blobs break the surface and flop over. My favorite was watching them slap the water with their tail. You could track them by looking for a spray of water from their blow hole. Such amazing creatures. Can’t wait to get closer.”

We left REALLY early from Bariloche . . . long before sunrise. We had a long drive ahead. A long, wet, cloudy drive.

I spent the night packing to the sound of rain. Luckily, our room was so tiny, half our stuff was still packed. The rain stopped just as Chris brought the car around. A couple hours later, the car was filled to capacity. Last addition – 2 dogs with spiffy new haircuts.

Added to the pile was a full gas can that needed to be stored upright. Unfortunately, fumes still escaped making us open the windows periodically to flush the air. 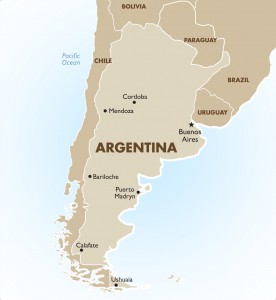 Our trek today was 952 km or 590 miles . . . like driving from Minneapolis to Indianapolis. The first half was twisties through the Andes. The second half of our estimated 12-hour drive was through the center of Argentina . . . a never ending Pampas with unknown road conditions. Google, our maps, and TomTom showed very few populated areas once we turned east. Thus, we carried the smelly gas can. Even if we found a gas station, they were likely to only have diesel.

We drove south along the Andes through El Bolson. This area is known as the “Valley of the Berries,” with enough blackberries, blueberries and raspberries to supply much of the country. In Colombia, we would find jam with labels saying the berries were from El Bolson.

Eventually, we reached the town of Esquel. Leaving Argentina’s western border, we turned east. Destination: Puerto Madryn on the east coast overlooking the Atlantic Ocean. Originally, we planned to come here from Cordoba, but the lure of mountain skiing made us detour. Even though Puerto Madryn was only 700 miles from Buenos Aries, we still had no plans to go there. 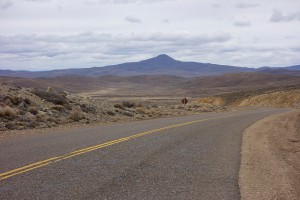 From here on, we saw very few vehicles. Virtually no towns or people. We knew people were around since we saw herds of cows and sheep.

Our favorite was the horses hanging out with the flamingos! 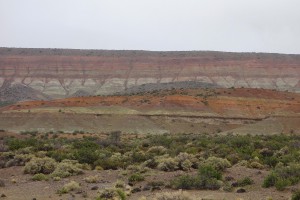 The surroundings were beautiful in a stark way. A portion of the land was old lava fields, like the Pampas I described outside Cordoba. Once again, you could see the history of the earth in the distinct layers. It was quite a geology lesson.

We arrived in Puerto Madryn on the evening of October 1. As luck would have it, we were booked at a very nice hotel. Later, people commented they were surprised that they let us stay there with dogs. Glad they did, we loved our view. Of course, Sedona chose this as the one and only place she chose to pee in the room (luckily, it was a tile floor that was easily cleaned). Bonus was an incredible breakfast buffet. I am not usually a breakfast person, but for 16 days I ate breakfast every morning.

With our binoculars, we watched whales breaching in the distance. The whales are why we are here. June to December is whale watching season.

Being on the coast, I was drooling over the thought of eating seafood. 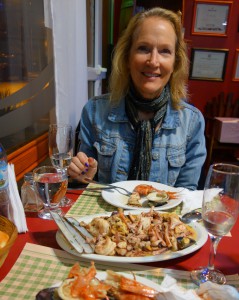 As soon as we had checked into our room, we headed to the closest seafood restaurant. The restaurant brought out two plates piled high with seafood. One plate was cold, one was hot. Most of the seafood we did not recognize, but we tried it all and loved most of it. We are so spoiled in the USA where we can get nice seafood anytime. 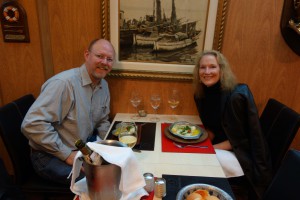 We ate out every night since we had no kitchen in our room. This picture was taken at Cantina El Nautico. Even though the place was touristy and always packed, we liked it well enough to return 2 more times. Their deep fried baby squid was to die for. 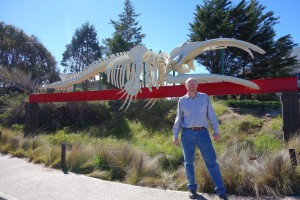 Chris standing next to a skeleton of a Southern Right Whale.

For a fee of $8, we visited EcoCentro. It is a small but informative museum giving an overview of the local wildlife. Most of the displays had an English translation. There were a few hands-on exhibits for kids: touch the starfish type things. One impressive exhibit had hundreds of blue stands of lights hanging from the ceiling. You sort of felt like you were walking in the ocean. All the while playing a recording of whale sonar. If you have never heard whales, they produce a haunting, melodic sound. Pretty cool.

The pictures were the best part. Dozens of pictures of the Right Whale. Right Whales are incredible creatures. They can be identified from one another by the white patches on their head. Each is different, like a finger print. These white areas are also creepy – you will have to read my DIDYA in the next few days to learn why. 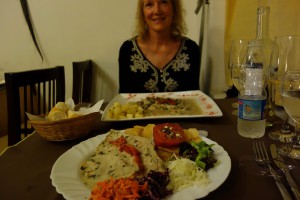 Both Chris and I felt at home in this town. We ate enough seafood to make up for the shortage during the past 5 months. We enjoyed trying something new. This meal was at a Basque restaurant. The owner recommended “Aleta de Raya”. He explained what it was, but it was not until we were eating it that we understood. It was the fin of a stingray. Stringy and delicious, similar to crab. 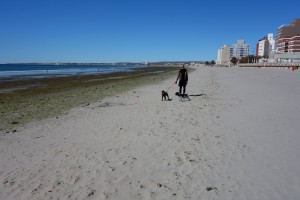 Of course, the dogs loved the beach even though it was rather boggy and full of seaweed and stuff that washed in with the waves.

We exchanged some money since the closer you are to Buenos Aries, the better the rate. For the first time, we felt awkward doing it. The hotel staff became nervous and would not recommend anyone to exchange. We finally asked a sales gal across the street who pointed us in the general direction. We exchanged at a rate of 9.3 pesos to the dollar; the official was 5.3. It is definitely an advantage to find someone to give you the blue rate.