“I’m happy Chris was not driving yesterday. The drivers are crazy. I grabbed the armrest a hundred times during the van ride to our apartment. Glad Chris could look around – the graffiti is amazing! It is literally everywhere. This would never be allowed in the US. Too bad – most is really good. Even makes the “rundown” places look better.”
“We booked an apartment one block from a park – green grass for the dogs. Our dogs are leashed – no chasing birds, people or playing with other dogs. LOTS of strays. Glad park is close by – not far to walk after dark. Entire area is well lit.” 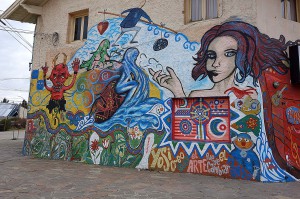 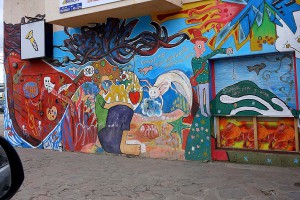 A few feet from our apartment complex was a wall dedicated to graffiti. Artists spent 4 days painting. It stayed up for an entire month, no one added any additional “”expressions.” The next month, another group repainted it. There are some genuinely talented artists in Uruguay. We spent hours walking our neighborhood looking at the graffiti on walls, bridges and buildings. 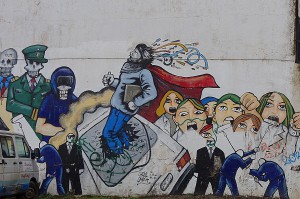 One of the reasons we chose this apartment — aside from the fact they allowed dogs — was the location of a park one block away… green space to walk the dogs. Unfortunately, shortly after we arrived they closed the park for renovations. We ducked under the boards until they added enough of them to prevent even me from squeaking through. After that, we ran a bit farther to The Rambla, the boardwalk along the Rio de la Plata. 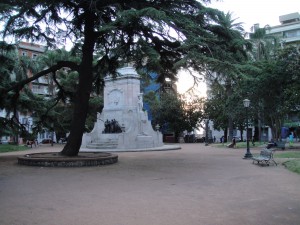 The “green space” near our apartment that was soon closed

Beware – most people let their dogs poop on the sidewalk. Not OK for our dogs!

There are MANY stray dogs (throughout South America). Most were friendly. One dog walker carried a big stick and a can of pepper spray due to a “mal” dog. We never met this mean dog. We did keep our dogs away from the other dogs so they would not pick up anything undesirable.

The Rambla was safe during the day, but we were more cautious after dark. Expats were often concerned for our safety in Ciudad Vieja. If you take logical precautions, you should be safe: no dark streets at night, avoid areas known for trouble, do not wear expensive jewelry, do not carry an expensive camera in full view, carry your billfold in your front pocket or a zippered pocket, etc. Police stood every few blocks. We felt safe. Chris did carry a dummy billfold just in case. It contained an old driver’s license, closed account credit cards and a few bills of the local currency. We figured if we did get mugged, they would think they had what they wanted and leave. We have never had to find out. Crime in Uruguay is often not the violent kind. Pick pocketing is common, but brandishing a weapon is not.