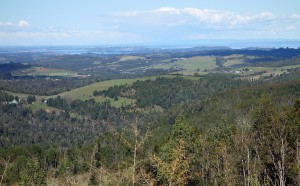 During our stays at Puerto Varas, we did day drives. There really is not much listed in guide books to see in this area. Like I said, it is mainly a hub for excursions to other places. One day we decided to drive to the Pacific Coast. It was challenging since TomTom did not have Chile, and maps were very poor; we drove many roads that were not on the maps. We just kept taking roads that headed west. 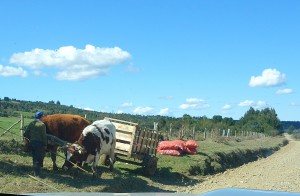 After numerous wrong turns and passing a few oxen carts, we arrived at what we were to learn was called Pinuno Beach. 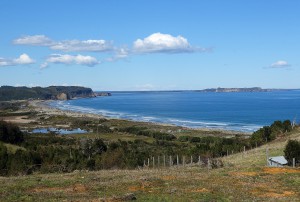 According to the maps, the roads we just drove do not exist. We actually had aimed for a beach farther north, but we were glad to stop here. 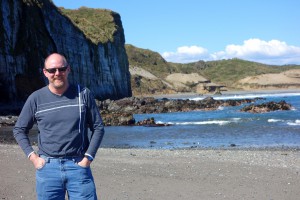 Breaking News July 2003
THE CHILEAN BLOB!!!
NEW LIFE FORM?
In July of 2003,a mass was discovered on shore at Pinuno Beach. It was presumed to have washed up. It weighed 14 tons and was 39 feet across. No one could identify it. Some people speculated it was a new life form. It was not until the following year that DNA tests identified it as a giant mass of . . . . . . sperm whale fat.
It had hundreds of people visiting this remote beach and scratching their heads for a year. 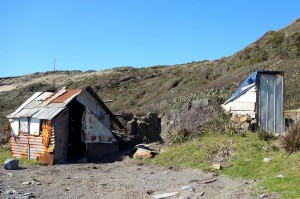 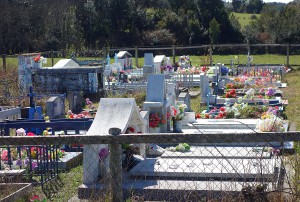 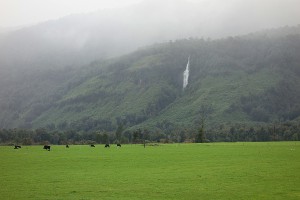 Sometimes a cemetery can look cheerful.
My friend Norie described Chile as “electric green.” We agreed. There were waterfalls everywhere. On the other side of the Andes (in Argentina) it was dry, but here water was plentiful; it did not just flow across the roads, it actually came up through the roads. We would come across a tiny spring bubbling up from the center of the road. 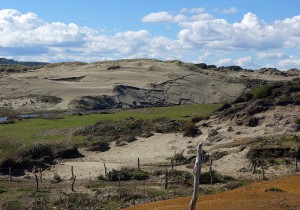 A sand dune cut into this field. The right side was collapsing like an avalanche. 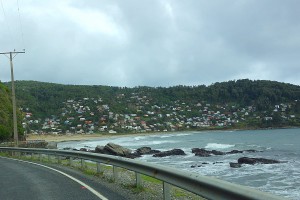 We visited a  Mapuche village called Maicolpue. These traditional communities continue the Mapuche culture. The Mapuche were powerful rulers of central and southern Chile. The Inca ruled the north. Remnants of this once mighty nation are scattered throughout Chile. 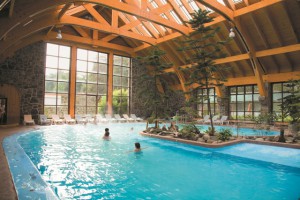 One favorite excursion from Puerto Varas is to the Termas de Puyehue, a huge spa nestled into the mountains. The water is so pure, it is bottled at a nearby facility: Puyehue Mineral Water, sold up and down Chile.
Earlier in 2015, we stayed in Osorno. We needed to have our car serviced, a new tail light installed, and new tires put on. We had arranged through Goodyear to get 4 new tires (just like the ones already on our car). We could not get the tires in Argentina. We had one slow leak, but we had never had a single flat. Our tires just had enough miles that we decided it was time for new ones before winter in the mountains. We could not get the new ones filled with nitrogen so we would have to keep a closer watch on the pressure. The Toyota dealership was able to replace our broken tail light. Toyota was excellent to work with throughout South America.
The Chilean-to-US exchange rate in 2015 was better than 2013 (685 vs. 510). Always nice.
The most notable thing in Osorno — and the most photographed — is the massive bronze bull in the plaza. It was unveiled in 2003. It is 15 feet long, 4 feet wide and over 8 feet tall. Sitting on a pedestal, it was even taller. The pedestal also brought into view the main part photographed: this virile bull sports huge bronze balls. The joke is that the artist had “brass balls” to cast this. Actually, we misuse “brass balls” to mean courage. It actually means “to drive a hard bargain” and it was originated in the olden days by pawn shops. They hung 3 brass balls in their doorway signifying their type of business. 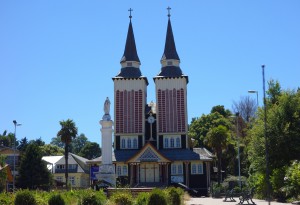 North of Puerto Varas, we drove past this beautiful church. I luckily remembered to take a picture of it. It is colorful like the ones on Chiloe, but more elaborate and better kept up. 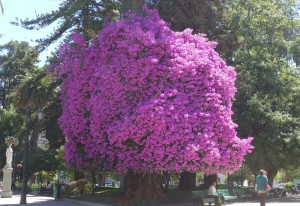 A central plaza had this bright pink tree. Weird to see a tree in full bloom for the year-end holidays. 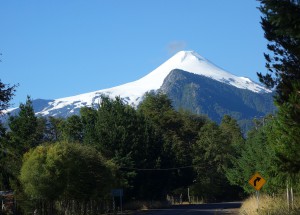 Farther north we came to the town of Pucón, located at the foot of Volcan Villarrica. When we came through in 2013 it was smoking, but had not erupted since 1984. There are signs along the highway and in town marking the evacuation route in case of an eruption. In coastal towns, there are also sirens for tsunamis. Definitely not in Minnesota. We chose not to climb Villarrica. The volcano continued to rumble, THEN, in March of 2015, it blew!
We rented a cabin near town. It did not have internet so we forced ourselves to drink cappuccinos and eat ice cream at a little place in town. 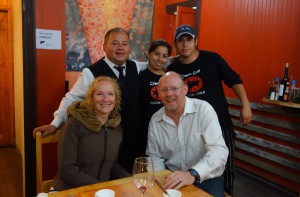 We rang in the new year at a parrilla. The owner made us feel like family. 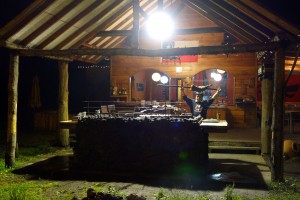 The chef put on a show for us. We could not have asked for a better end to 2013.