October 5, 2013
“We drove up the coast from Puerto Madryn to Peninsula Valdes. It is a large area that can really only be seen if you have a car. I did not see any buses. There is a lot to see. We spent 5 hours there today and we are going back tomorrow. Tomorrow we plan to ride a boat out to see the Right Whales.”
Our true destination heading to the east coast was Peninsula Valdes. It is a long drive from Puerto Madryn. You pay an entrance fee of $130 Pesos to enter a large wildlife sanctuary. We spent two days driving to the different viewing points.

You can bring your dog in, but you need to keep them leased and they are restricted from certain areas. We watched one guy let his little dog out near the penguins. Not a good idea. In this case, the little dog was more at risk. It makes us mad that people like this are the reason they ban dogs from parks. 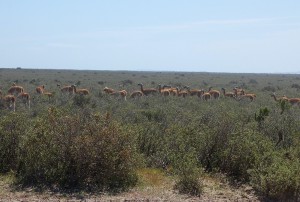 The sanctuary is a large, mostly flat peninsula. We set off for the farthest point figuring we would work our way back toward the gate. The drive was through a desolate and dry vista of endless stubby shrubs. The monotony was broken by herds of skittish Guanaco. They look similar to a Llama, but smaller. Most often, we saw them in groups of 20 to 30 members . .  .usually just a group of butts heading away. 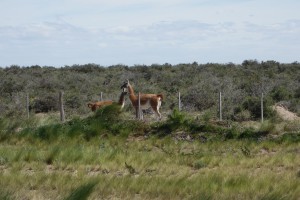 Every once in a while we were lucky to get close to one. 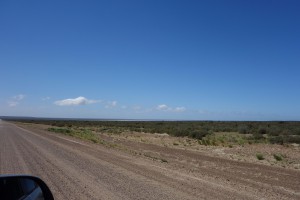 The land was incredibly flat. 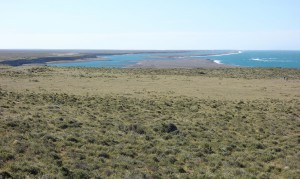 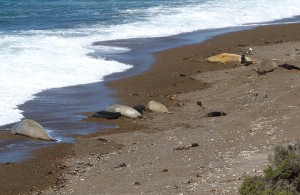 The dirt roads finally brought us to the farthest viewing area. We were extremely lucky to see Orcas, but they were too far away to get a good picture. They are here to hunt the seals. From our perch on the edge of a cliff, we saw numerous seals basking in the sun. You can see penguins, fur seals, sea lions, and elephant seals along the coast. 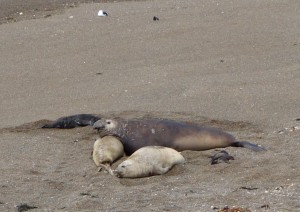 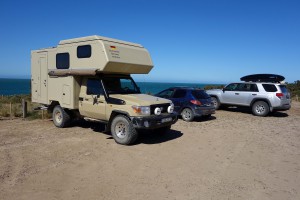 We met a German couple who were traveling in a camper they shipped from Germany. At this same stop, we made the mistake of leaving our window down an inch for the dogs since the temperature was in to 70’s. We were gone for maybe 45 minutes, but the inside of our car was covered in dust. That night, we unloaded everything from the car and cleaned it. Months later we found places we had missed. 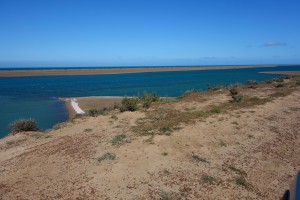 Paralleling much of the coast line was an island. This strip of sand island was dotted with seals

The entire peninsula had a cliff dropping down to the water. The perfect home for what else . . . . Penguins!

I always envisioned penguins living where it was cold. These guys sat in the sun. 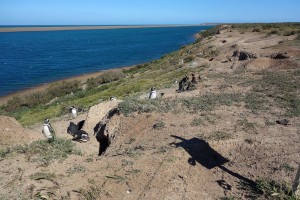 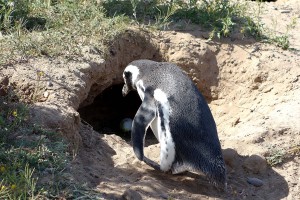 Notice the island is still just off shore,  still littered with seals. 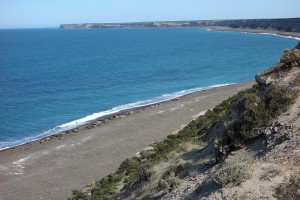 We took one last look at the coast before turning inland. 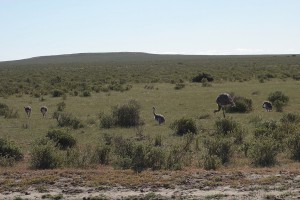 As we worked our way toward the entrance gate, we came across the elusive Rhea. They are a smaller version of an ostrich. A mom with 8 babies!

There also are giant rabbits that run more than hop. They are called Mara, the fourth largest rodent in the world. Remember we saw the largest one, capybara, at Iguazu. Only the beaver and porcupines are larger than the Mara. Unfortunately, they moved too fast for us to get a picture.

With the sun dipping toward the horizon, we came across this lake. 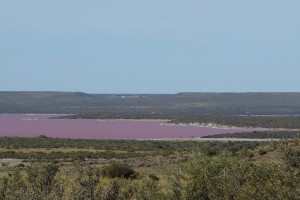 This is the actual color. This is a salt lake 120 feet below sea level. The pink color is derived from a bacteria that thrives in salt water.

We were stopped at the gate. They took our entrance stub and stamped it. Confused, we were told it gave us free entrance the next day. Apparently, it had been too windy for people to go out on the boats to view the whales. Since that is just what we planned to do the next day, it worked out perfect for us. Glad we had not booked it for this day.