MollyOctober 25, 2015October 25, 2015 Puerto Varas No Comments
Back on mainland Chile, we headed north along the Pan-American Highway. The town of Puerto Montt recently grew to 168,000 residents due to salmon farming. Chile is divided into 3 regions: the Andes to the east, the coastal mountains to the west, and the Central Valley between the two mountain ranges. Puerto Montt is located at the southern end of the Central Valley, a rich agricultural area that runs far to the north.
Chile is 2,653 miles long (extending over 1/2 of the continent), but only 221 miles wide at its widest (far north). All this land is roughly two times the area of California.
Puerto Montt and Puerto Varas offer many activities such as hiking the volcanos and fishing, but it is also a main hub for excursions to Patagonia to see the Perito Moreno Glacier, Fitz Roy, etc. 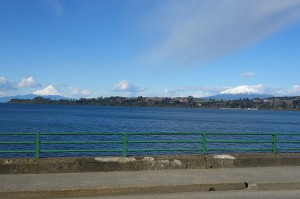 Puerto Varas is a few miles north of Puerto Montt. It is almost straight west of Bariloche, Argentina; just on the other side of the Andes. We stayed here twice: once in 2013 and again in 2015. Puerto Varas is located on the shores of Lago Llanquihue. It is a German settlement of 32,000 individuals. 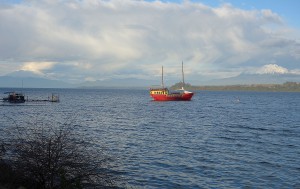 According to guide books up through 2014, the town has “an arresting lake view of two extinct volcanos:” Volcan Osorno (on the left) and Volcan Calbuco (on the right). Volcan Osorno is the most photographed with its perfect conical peak. 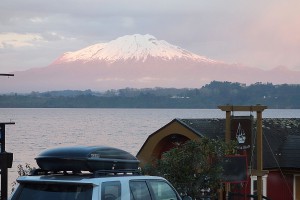 If Volcan Calbuco sounds familiar, it is the volcano that blew in May of 2015. That eruption dumped a ton of ash on us in San Martin, Argentina. The guide books now read “two menacing snowcapped volcanos . . . .”
This is a close-up of Volcan Calbuco in 2013 before it blew. 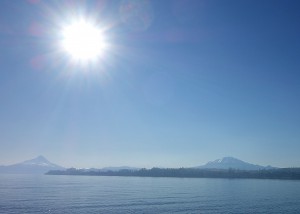 When we arrived, the volcanos were crowned with snow, but warm weather melted much of the ice cap. It was unusual to see the volcanos with so little snow. 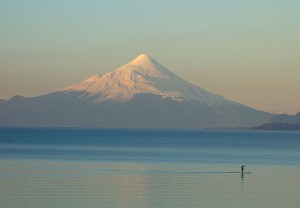 Love this sunset picture with the paddleboarder in front of Volcan Osorno. 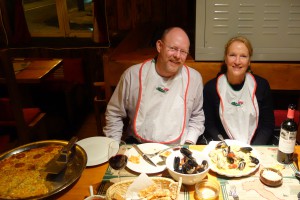 Of course, we ate lots of seafood. Even the pizza joint served seafood pasta. I guess they thought we needed the bibs.
Our hotel had complimentary bicycles. We reserved them one day. It had been many years since I was on a bike. I think these bikes dated back even before my time . . . plenty of rust . . . one-and-a-half hand grips out of four . . . and back-pedal coaster brakes. If my riding skills didn’t make this a challenge already, the crumbled sidewalks and crazy drivers made for a near suicidal day. We hung in there and at the end of the day we had ridden to downtown and back.
Not being negative, but the people here were not as friendly as those in Argentina. We would have expected overall that they would be happier since Chile has on a more solid financial foundation. Unemployment is low and wages are good. 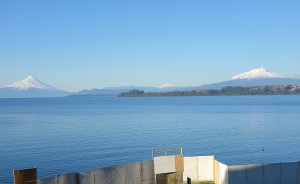 This is what we saw when we returned in 2015. Volcan Calbuco was still smoking. 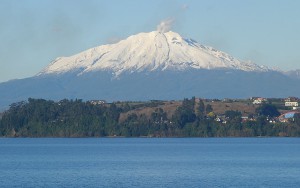 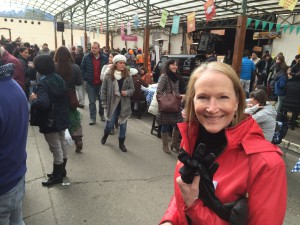 Also, in 2015, there was a festival in town. This is me at the festival – notice my red coat. Now . . . notice the lack of color on anyone else. Most people wear conservatively-colored clothing. We noticed this in Uruguay and Argentina, too. My red coat definitely stood out. We later saw more color once we reached Peru. 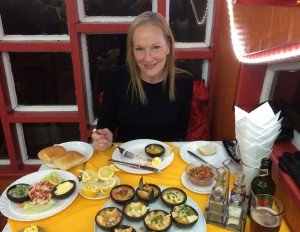 Like our previous visit to Puerto Varas, we ate lots of seafood. We tried sampler dishes, offering a variety of things we had never tried before. Each cup had a different delectable mixture. 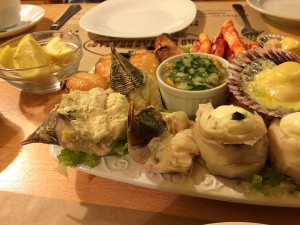 Chris’ most memorable meal was on our last night. The previous night one of the cups offered “barnacles.” A small amount of meat was mixed with a spicy sauce and it was quite good. However, on our last night, a different restaurant offered a seafood platter with one of the things being “barnacles”. . . . the whole barnacle. 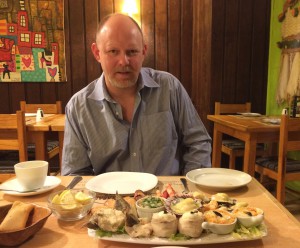 If Chris is making a funny face, it is due to just swallowing a large bite of barnacle. Apparently we were not familiar with the proper way to eat a barnacle. 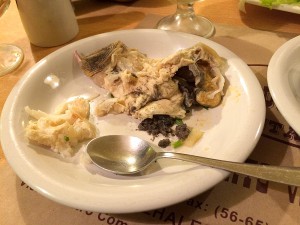 The dark area in the center, which Chris assumed was like roe, turned out to be sand! Even brushing his teeth later did not remove all the grittiness from his mouth.