“Upon returning from the USA, we stopped in Santiago for 3 days. No dogs. We stayed in a very nice, Victorian feeling, Parisian hotel. We loved it. And yes, it had a proper breakfast.”

The red-eye flight home took 10 hours. These were our 4th and 5th flights between the USA and South America. The flights all take about the same time, but they are getting harder. I could say age, but honestly I am only one year older.  We flew through Atlanta, Georgia. Snow had closed the airport for 3 days. Our flight was delayed, than canceled when the de-icer ran into the plane after de-icing it for the second time. Than, another plane was inexplicably found and we were back in the air. I think Delta realized they would have to pay to put us up (unlike all the people delayed by weather). The trip from Santiago to Minneapolis took forever! 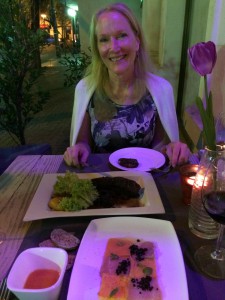 Santiago is Chile’s capital and its largest city with 5 million people. 40% of Chileans call this home. Santiago is located between the Andes and the Coastal range. We stayed in Providencia, an upscale neighborhood.

Three days is not nearly enough time to get the feel of such a large city. We sampled only a tiny part.

If I had to recap Santiago in only two words . . . “we ate.” We ate out all of our meals since we did not have a kitchen. I am so glad. Excellent restaurants were close by. In fact, right across the street was my favorite. We ate here 3 times . . . not bad in 3 days. They had Fois Gras; need I say more. 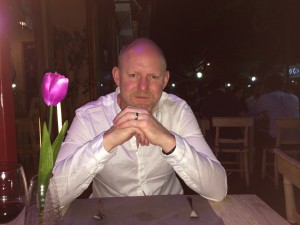 Sadly, at this restaurant, the couple sitting next to us had her purse stolen. Looking back, I can think of things I might have picked up on quicker, but it is always easier to look back and critique. I did realize recalling what you had seen to the police is not that easy. 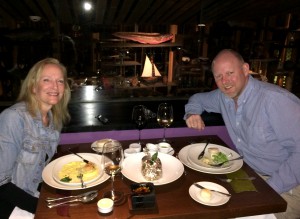 We love trying a chef’s creation. This place offered seafood. Being in a very “coastal” country, we seem to always crave seafood. 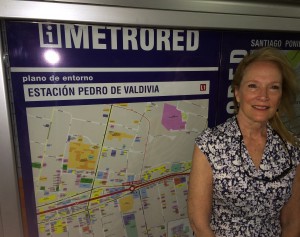 Santiago has a great metro system. We mastered it in no time and were off to see the city. You have to realize, we hardly ever use public transportation since we have our own car. But our car is not here. 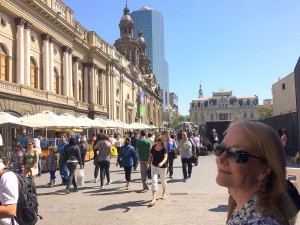 The city is fairly clean and was loaded with neoclassical architecture. 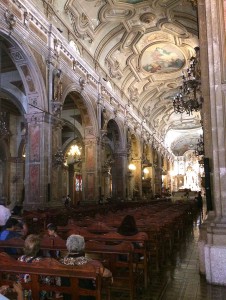 (Left)This is the Metropolitan Cathedral. I never get tired of the beautiful churches. 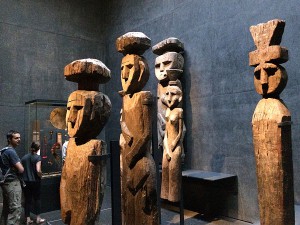 My favorite place was the Museo Chileno de Arte Precolombino. After paying and heading to the lowest level, you go around a corner and are greeted by these totems. 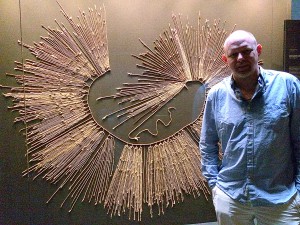 When I took this picture, I had not learned about Machu Picchu. The museum says it is a counting rope. It may be. But new information has come to light. It was thought that the early native civilizations had no “written” way to record events, no written language. This was surprising considering the complexity of some of these civilizations. Now, some people believe this is actually “a story”, or some type of a written record. 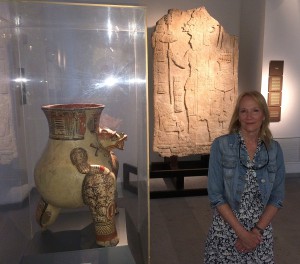 We spent hours here. It was a fascinating museum. We only left because we felt it was wise to ride the metro back before dark. 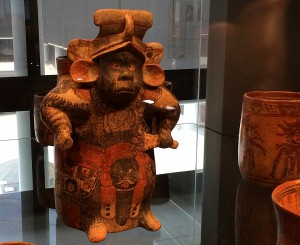 I fell in love with this guy. I would love to have him in my home. What do you suppose he was trying to say? 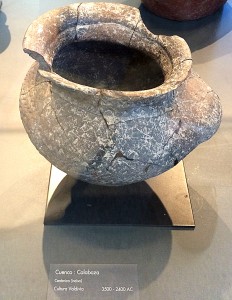 This pot was VERY old. Obviously it had been broken, but how cool to realize it was made 2400 to 3500 years before Christ was born. Imagine what life was like at that time. 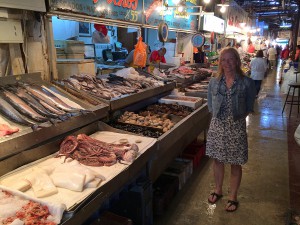 We had to visit a local seafood market even though we were not buying. I think local markets reflect so much of the people around them.

Our wonderful host Gonzalo who drove us to Santiago for our flight, now arranged to leave us his car for our 2-hour return trip to Santa Cruz. With our over-stuffed luggage, taking the bus would have been a challenge. 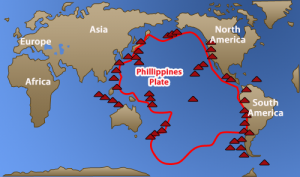 We experienced another earthquake. I have a habit of sleeping through too many of them, only waking when the dogs bark. But it gives me a rush to actually feel one. Like I said, I am from Minnesota. I haven’t experienced many earthquakes in my life. This area is a hot-bed for earthquakes due to its relation to the Ring of Fire. What a great set-up for a DIDYA!