We start first with plate tectonics. Tectonic plates are pieces of the earth’s crust (of varying size) that are continuously moving, sort of floating on the earth’s surface. As these plates move, they scrape along each other and/or collide with one another. 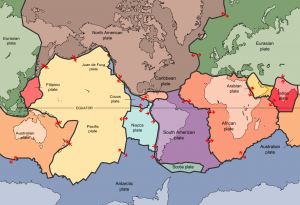 Subduction zones  are where two plates collide, one pushing upwards (voila-mountains) and/or pushing one plate beneath the other. This is known as a subduction zone. These zones are known to produce the strongest earthquakes on earth. Their particular structure allows more stress to build up before energy released. 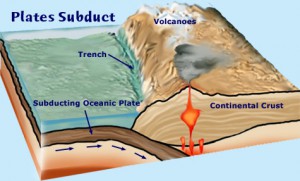 The Ring of Fire produces 90% of world’s earthquakes. 81% of the world’s largest earthquakes happen here.

Chile holds the record for largest earthquake ever recorded. It took place on May 22, 1960 near Villarica (remember we were just there) and was called the Valdivia earthquake. This earthquake was 9.5 on the moment magnitude scale and lasted 10 minutes.

It triggered tsunamis up to 82 feet high that battered the coast of Chile. A tsunami was experienced as far away as Hawaii, Japan and Australia. Hilo (on Hawaii) was devastated.

The earthquake triggered landslides, blocking some rivers, and filling lakes to dangerous levels. Later these earthen dams broke, sending another flood of ash and debris.

As to be expected with the world’s largest earthquake, a volcanic eruption followed the earthquake by 38 hours. Now – here comes the “fire” in The Ring of Fire.

Even though it is called a ring, it is actually  more of a horseshoe shape. “Horseshoe of Fire” just doesn’t have the same pizzazz. 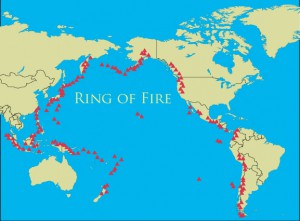 The Ring of Fire contains 452 volcanos: 75% of the world’s (active and dormant) volcanos.

In the last 11,700 years, all but 3 of the 25 largest volcanic eruptions in the world have happened in Ring of Fire.

One part of the Ring of Fire runs along the western edge of South America. This is where the Nazca Plate dives below (subducts beneath) the westward moving South American Plate. All the quakes that have taken place in the past 3 years have been along this line.

The Ring of Fire is a hot zone with all of its current activity. In the years ahead you will hear this area mentioned in regard to earthquakes and volcanic eruptions. Now you know where it is and what it is.

We have experienced a number of earthquakes in our 3 years here. But, most surprising has been the number of volcanic eruptions. We are not in Kansas anymore.

Note: Volcan Villarica is one of Chile’s most active volcanos. It has the unusual distinction of being one of only 5 volcanos worldwide known to have an active lava lake within its cauldron.