“April Fools Day! It has taken me a few days to adjust to such a tiny apartment after our huge home in Mantanzas. Viña del Mar was just a short drive from Mantanzas. I still hate the hassle of packing, but at least we did not have the stress of a long drive or sleeping in the car. It seems like each time we have the luxury of a large home, our next stop is a tiny, tiny place. At least we have a nice view.”

When I wrote this in my journal I had no idea how many things we would see from our window. 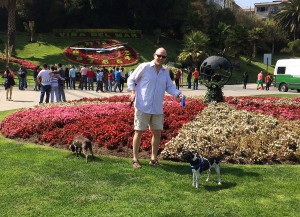 It took three hours to drive from Matanzas to Viña del Mar, Chile: “Vineyard of the Sea,” population 318,000. This is an upscale suburb of Valparaiso. Viña del Mar is known as the Garden City due to the abundance of green space and flowers – lots of flowers. Viña del Mar really established itself after the railroad completed a link between Valparaiso and Santiago. During high season, the beaches are crowded with the well heeled Santiaguinos. Not that many foreign tourists stay here, preferring to do day trips from Valparaiso. Once again, before going in the water, remember it is VERY cold due to the Humboldt current. 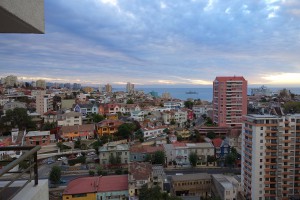 Our new home was on the 21st floor of an apartment building  just a few blocks from the coast. Looking straight out, we saw the ocean. To our left was the port and city of Valparaiso. In the picture we happened to get a Navy ship. Apparently, it is illegal to photograph them. Since the ships were often in the port, it was hard to avoid. 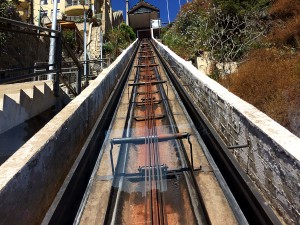 Valparaiso is one of the South Pacific’s most important seaports. It was important during the late 1800’s as a stopover for ships going between the Atlantic and the Pacific, crossing through the Straits of Magellan. Pictures of this busy port often show a backdrop of colorful houses crowding up the steep hills (cerros) of the city. The high hills are connected with steep footpaths and ascensores or elevators. The ascensores were built during the city’s heyday 1883 – 1916. Valparaiso went downhill after the 1906 earthquake and the opening of the Panama Canal in 1914. 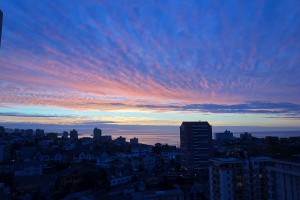 We stayed 1 month in our super tiny apartment. As always, we got some stunning sky pictures – never get tired of sunsets. 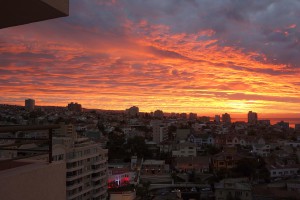 During our time there, we experienced many earthquakes. There was one large one that had it’s epicenter just north of here in the town of Iquique. Large sections of Iquique were heavily damaged. 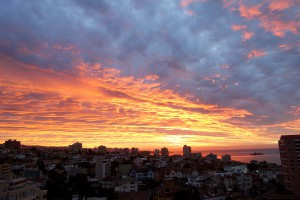 It took us a while to realize we were hearing the tsunami sirens blasting all over Viña del Mar. People were quickly getting to higher ground. The wave surge that eventually arrived was about 1 foot high. 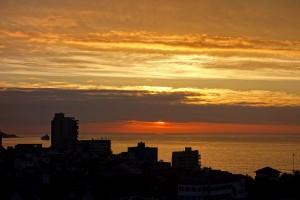 We saw what we thought at first was an amazing sunset like this . . . . 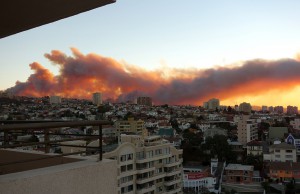 . . . only to realize that Valparaiso was burning. Since it was closer to us than the earthquake, the fire in Valparaiso seemed even more devastating. Over 500 homes burned; most were in the poor section. 10,000 people were evacuated. The fire raged for 2 days. 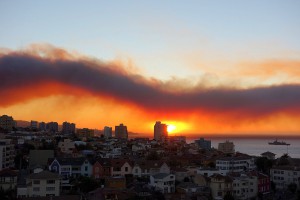 The government provided some help, but it was already dealing with the aftermath of the earthquakes. It was amazing to watch a large city come together like a small town. Students went door-to-door collecting food and clothing. Buses carried people to the worst areas to help with the clean-up. We had learned from a waiter where to catch the bus. Unfortunately, I woke with an yucky eye infection in both eyes. I feared that the ash would only make it worse. We already wondered if the ash was part of what had triggered the eye infection; there was a lot of ash in the air. Instead of boarding the bus, we went to find a doctor. Chile is not like Argentina. You cannot just go to the pharmacy and get something. It is like the USA where you need to visit the doctor first. I really liked the way Argentina made it easy and inexpensive to treat yourself when you know the problem. Since I could not physically help, we filled boxes with non-perishable food & beverages and we parted with as much of our clothing as we could. In addition, Chris helped with ongoing collecting and sorting of items. 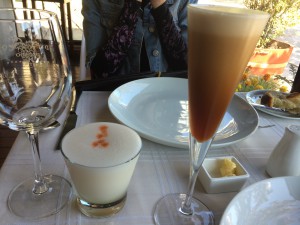 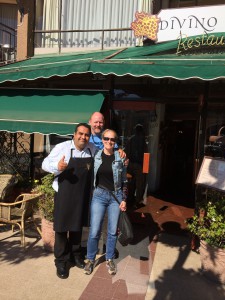 We ate out a few times . . .  we are always tempted with seafood. We found this wonderful restaurant and owner during one of our walks. With 2 kinds of Pisco Sours, who could say no. 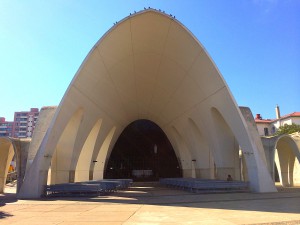 On another walk we found this lovely open-air church. We planned to return for a service, but life distracted us. 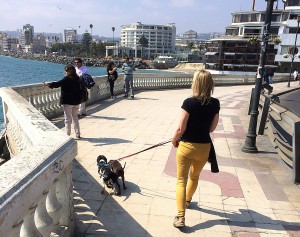 However, we did spend a number of days walking the boardwalk along the coast. 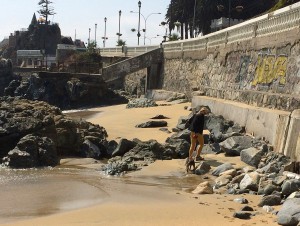 The dogs were always happy when we found a tiny piece of sand to play on. 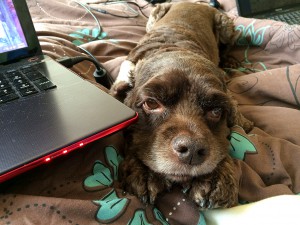 After leaving Viña del Mar, we returned to Argentina for 3 months. We stayed in Mendoza and Salta. I covered these when I was talking about Argentina. So my next post will skip ahead in time to the end of July when we returned to Chile for one month in Antofagasta before continuing our trek toward Colombia.