My blog break stretched much longer than I had expected. I am finding it hard to re-commit to writing. The past 2 months have sped by. We were busy with: packing up all our stuff after 8 months in San Martin (Arg), traveling 2 full days to Cordoba, and unpacking all our stuff into a tiny studio apartment. We spent a few days recovering. Then, Apex suffered severe pain (like arthritis) due to having Lyme Disease 6 years ago. This was a particularly difficult episode. In addition to doctoring him, we are busy making arrangements to ship our vehicle back to the US and booking flights for us and the dogs.

“We finally made it to Arequipa, Peru. What a beautiful location. We are surrounded by volcanos! The weather is warm and sunny. Unpacking took all day yesterday. We plan to  venture out tomorrow.”

We left Antofagasta, Chile and crossed the border between Arica, Chile and Tacna, Peru. The border crossing was grueling. First, we had to unload ALL our stuff and run it through a scanner. Bus loads of locals literally laughed at us. Even though we had already done the usual vet visit, doggie heath certificate, de-worming and rabies vaccination confirmation, we had the addition of a border vet to deal with, plus additional fees to pay. Unfortunately, we had no Peruvian cash yet. The border cashier window would not open until 9 (it ended up being 10). Eventually, they agreed to take US cash — for a fee. Then . . . we needed to re-load the car! Altogether it took us about 5 hours to go through Peru customs.

The heightened security warnings began with the border guards warning us about safety. We were already leery due to warnings issued by the State Dept a few days prior. The State Dept was warning to avoid all unnecessary travel in Peru. Cars and buses were routinely being robbed and there were even a few kidnapping of tourists. Unfortunately, this set the tone for our time in Peru. We felt more confident having our first lodging as an apartment in an enclosed compound with a guard 24/7. 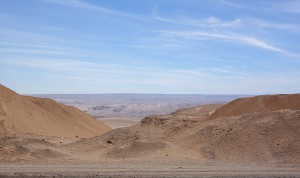 The scenery along our drive as we entered Peru was the same as it had been for much of northern Chile: the land was dry, barren, and gray/brown. 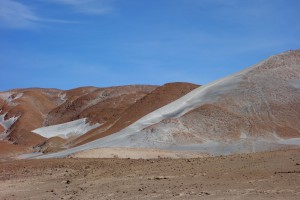 A touch of color was the blue sand. Unfortunately, the picture does not show the distinct blue cast. 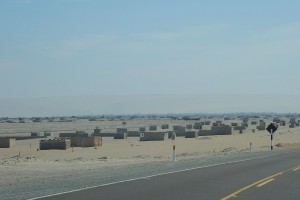 We came across virtually empty settlements comprised of grass huts. Thousands of these 8 by 8 foot woven grass shacks could be seen from the road. 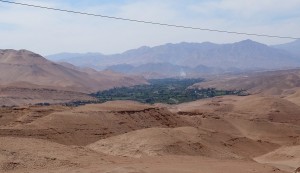 Suddenly we would spy a patch of lush green foliage – a river. Nestled in amongst the trees was an entire town.

It was late afternoon by the time we reached Arequipa. Arequipa has just under 1 million residents. It is sometimes referred to as “the White City” due to the stone used for the buildings. The city is surrounded by volcanos that are still rocking and rolling. There were no eruptions while we were there, but we did experience numerous earthquakes. 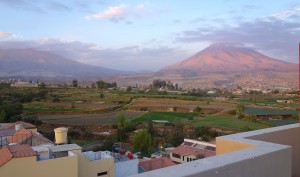 Our compound was comprised of a number of nice homes and small apartment buildings. We had a great view from our apartment of the volcanos. These are two of the volcanos at the edge of the city. 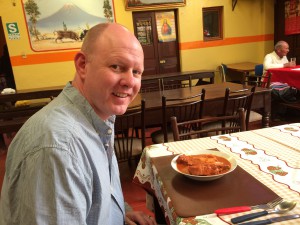 We walked to a small plaza a few blocks from our compound where we ate Adobo, a local spicy meat dish. 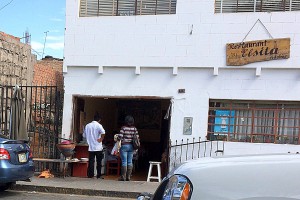 This restaurant seemed large in comparison to a few other restaurants along the plaza. Some restaurants consisted of a pot sitting outside a door with a few small plastic tables and stools inside. 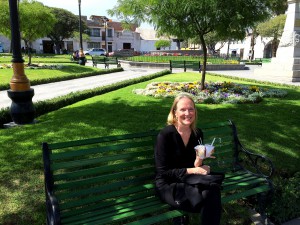 Desert was frozen yogurt and churros from a push cart in the plaza.

We were repeatedly warned by locals to be careful taking taxis. Residents talked of bad guys using taxis to kidnap tourists for ransom. The security guard at our compound would hail us a taxi. He would talk to a few before finding one he liked. However, once we were downtown we were on our own finding a taxi to bring us back to our compound. 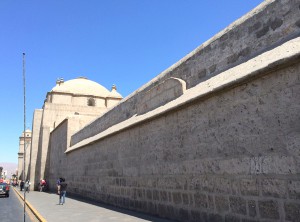 Our taxi ride took us past beautifully restored colonial buildings. On our way to the central plaza, Plaza de Armas, we passed the convent: Monasterio Santa Catalina. The huge convent takes up an entire city block. It is surrounded by a high stone wall. For many years wealthy families brought their sons and daughters to the convent. Once they entered, they never left. In 1970, the convent was opened to the public. You can get a good feel for what it would be like to live in such a place. 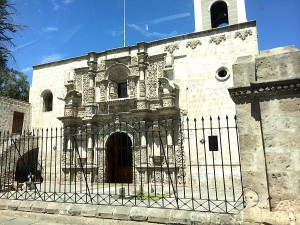 Beautifully restored buildings were scattered throughout the city. 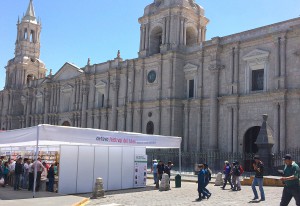 One side of the Plaza de Armas is the Iglesia de La Compania: a stunning cathedral built from the white local stone. 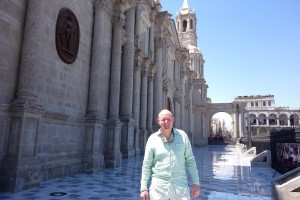 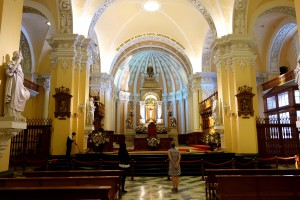 The interior is painted in a creamy yellow and adorned with flowers.

We were “lucky” to be on the roof when the lunch hour arrived.  My ears were ringing for hours. 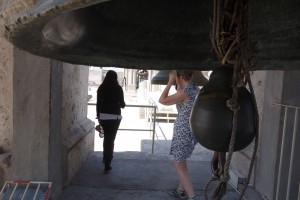 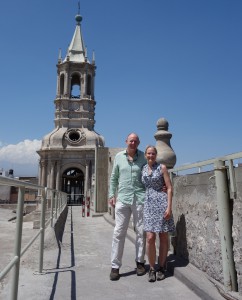 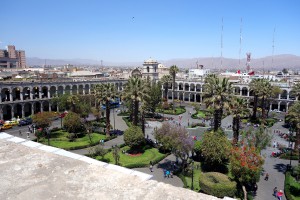 The roof provided a nice birds-eye view of the plaza. 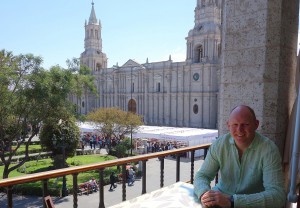 We ate lunch under one of the arches surrounding the square. It was touristy and you pay a premium for the location, but the food was pretty good and watching the children in the plaza was priceless. 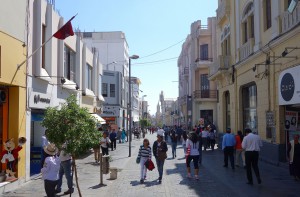 The city streets close to the plaza were quite clean. 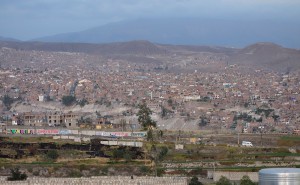 However, just outside the city you could see a vast shanty town. The poverty rate is around 30%. 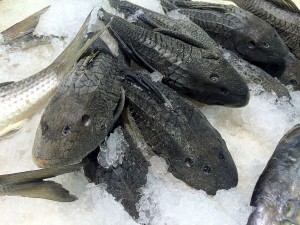 I love shopping at the local markets. However, some things I just can’t convince myself to prepare for dinner.

Arequipa is home to “the Inca Ice Maiden”. In 1995, high up on the Volcan Ampato, just outside of Arequipa, two guys found the Ice Maiden. She was a young girl who lived 500 years ago. She was sacrificed to appease the gods. What makes her stand out from other “mummies” is that she was frozen instead of dried so she is much better preserved. She can be seen at the Catholic University of Santa Maria’s museum. More about her in a DIDYA.

Close to Arequipa are the canyons Colca and Cotahuasi. They are the world’s deepest canyons. We heard they were impressive. Once again, due to the increased safety threat, we chose not to go there. Looking back, I think we happened to be in Peru at a particularly volatile time.

One thought on “Arequipa, Welcome to Peru”