The Inca Ice Maiden was discovered in 1995 by two guys looking for Inca offerings in the high volcanos of Peru. The Ice Maiden was found atop the Ampato Volcano which stands 20,700 feet high and is located outside the city of Arequipa. Volcan Sabancaya is a neighboring volcano to Ampato that continues to erupt. It is believed that many sacrifices were made to the god of Volcan Sabancaya since it is/was very tall and very active. The recent activity of Volcan Sabancaya — heat from ash — helped bring the ice maiden to light. She is special since she was frozen; not dried like most mummies. Therefore, even her stomach contents were preserved. 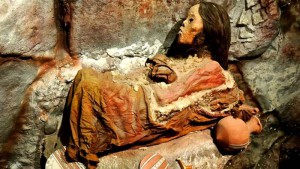 The Ice Maiden was a young Inca girl between the ages of 11 and 15. At a certain age, beautiful girls were chosen to live separately in compounds to protect their purity and prepare them for marriage or sacrifice.

After a year or more of living in the compound, a grand festival was arranged. Imagine arriving at the center plaza which was covered with beach sand that had been carried by llamas from far away. Colorful shells littered the walkway. There was much fanfare when the priests finally arrived in their colorful tunics, woven from the prized Vacuna wool and adorned with gold, silver, colorful feathers, and gemstones. They rode atop litters carried by slaves and were surrounded by their many attendants. The procession slowly crossed the plaza. Stories talk of beautifully decorated white alpacas specially bred for this festival.

At this ceremony, many girls were given to the elite as brides. A few were chosen for the honor of being presented to the god of the volcano, i.e., sacrificed. One of these girls was the Ice Maiden. She was 4 foot 2 inches tall. At the time of her death, she was dressed in finely woven garments usually only worn by the elite. She was heavily sedated with alcohol and cocoa leaves. In the late 1400’s, this young girl did a grueling walk up high on the volcano. She sat with her legs crossed. A heavy blow to her head just below her right eye ended her mortal life and joined her with the gods.

Jump ahead to 1995. Two guys were looking for Inca offerings high in the mountains. Due to recent volcanic activity and global warming melting the ice, the ground had shifted, exposing a bundle, the Ice Maiden. They did not want to leave her to seek permission from the government since the continually shifting ground would probably have covered her again. So, they used their ice pics to free here. Now, they needed to figure out how to get an 80 pound ice bundle down a treacherous mountain. After much effort, they succeeded. They arrived in Arequipa and she was brought to the Catholic University of Santa Maria.

This Ice Maiden was given the name of Juanita.

Here is where I almost made a serious mistake. It turns out there is more than one Inca Ice Maiden. Another one was found in Peru near Llullaillaco. She is the same age, but her remains seem to be even better preserved. She also had a boy and girl about 5 years old buried with her. As I mentioned with the Arequipa maiden, they were all sedated with alcohol and cocoa leaves (some leaves were still in the older girls cheek). Sadly, the little boy must not have gone peaceably. There were remains of blood and vomit on his clothing and he was bound tight enough to dislocate his ribs and pelvis. The older girl is so well preserved that it almost appears as if she has just fallen asleep. Her finely braided hair falls around her face. Her arms are crossed in her lap.

Today, it is not unusual for people to be looking for artifacts; especially gold and silver Inca offerings. Throughout Peru, they are still finding tombs with great wealth. Unfortunately, some of the discoverers can be violent grave robbers who are willing to steal and kill for these items. Understandably, local natives are nervous for their safety in addition to being angry that their sacred items are being disturbed.