“We left Antofagasta early in the morning. Once again, we have a long drive. Spent the night in Arica near the border with Peru.”

You may wonder how I can possibly do a third post about an area that I have continually described as desolate and barren.

I will talk a bit about three towns we visited nearby. Then . . . I will show you the other side of this area. 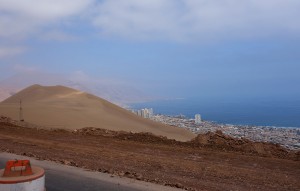 As we drove north from Antofagasta toward the Chile/Peru border, we passed Iquique. This was the town where the devastating earthquake had hit four months prior. Like many coastal towns, it is nestled between the rocky ridge and the Pacific. Hang-gliding is popular off the massive sand dune that towers over the town.  Iquique grew from the riches of the guano trade. With the demise of the guano trade, it has become popular as a duty-free zone. The mansions that once housed the wealthy have been restored and repurposed. 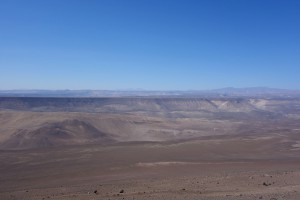 We had a 2-day drive through continuously barren land. We spent the night in an apartment in Arica, a border town. Arica is also a coastal town with tourist-filled beaches and enticing surf. Our one-night apartment was pretty seedy, but at least it was a bed and the parking was relatively secure. 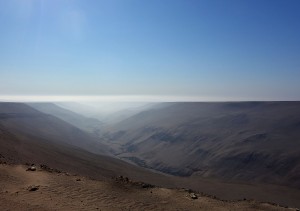 Just before crossing the border we saw signs warning travelers not to walk off the road. Apparently, there are a few residual landmines left over from the war between Chile and Bolivia/Peru.

One other town I would like to mention in Chile is San Pedro de Atacama near the borders with Argentina and Bolivia. We drove through this town on our way to Antofagasta, but did not stay in San Pedro de Atacama until a later date. It is a very bohemian town that attracts a number of backpackers. Recently, there has been a proliferation of 5-star lodgings tucked out of view. They were out of our budget. I think they catered to the wanna-be roughing-but-in-comfort crowd. We found a cabin at the outer edge of town. You needed a 4WD to get there, or walk since you had to cross a stream. It was basically just a room with no internet, but I loved the feel of the place. It was clean and cozy. San Pedro de Atacama is an oasis in the desert. Travelers love the star filled nights and dramatic landscapes.

And that brings me to “the other side” of this area. This huge area is desolate and barren. It is made up of rock, sand and salt lakes. BUT, it seduces you. I took many stunning pictures of this forlorn land. These are some of my favorites. 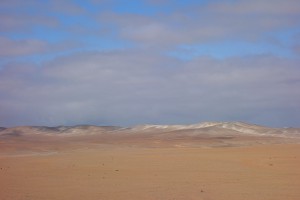 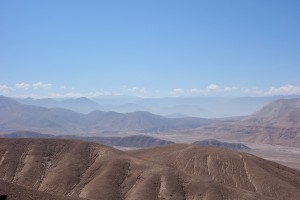 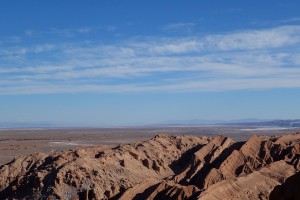 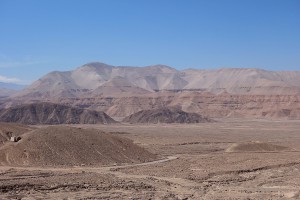 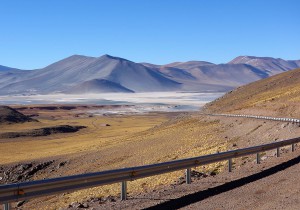 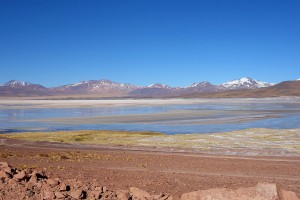 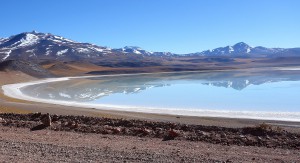 Now, I am taking a break. I have written well over 60,000 words . . . a book! Where are the publishers? I still have three countries to write about, but I will continue at a later date.

FYI – Tomorrow is election day here in Argentina. We were here during elections two years ago. Do you know that it is mandatory for each individual to vote? They even had police checking at the ski area to make sure people had voted. Argentina fought hard to rid themselves of a military junta in the 70’s. They are proud to have a democratic society and feel everyone needs to do their part. It would be great if we could get more people to vote in the US.