February 15, 2013
“I was amazed at how expensive it is to buy a car in Uruguay. A ten-year-old car costs as much as the same car new in the US. We were surprised to see so many vintage cars on the road. Today, we saw a Studebaker probably from the 1950’s and it was in great shape.“ 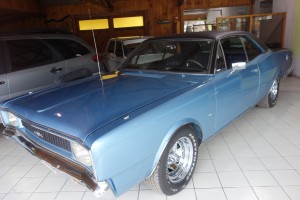 GTX at a showroom 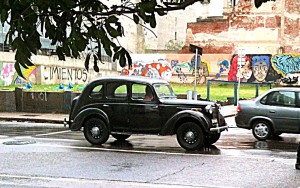 Driving down the street

After a time, we realized much of Uruguay resembled the US in the 1950’s. Paved roads gave way to dirt roads as you went out of town. The “mom and pop” stores outnumbered the mega stores. Houses were simple but adequate. Extended families spent most of their time together. 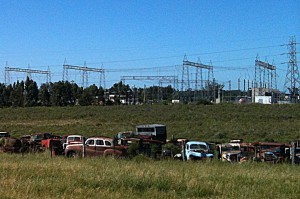 The final thing that made you think of the 50’s were the old cars. At any given time, you would see at least one old car from the 30’s, 40’s, or 50’s DRIVING down the street. Some in great shape, some not so much. 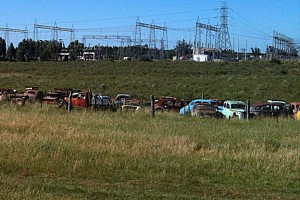 We heard they have recently blocked the sale of vintage cars from Uruguay to the US. This must have been a mecca for antique car enthusiasts. The place for movie producers to stock up on car shells to demolish on film. We took pictures of the junkyards or car grave yards with all these wonderful old cars lined up.

Buying a car here is very expensive with the 100% tax. A car that costs $30,000 in the US, sells for $60,000 in Uruguay. Since vehicles are so expensive, many people do not own cars. The buses are inexpensive and cover even the far-off towns. Every third car  on the road is a taxi. These too are relatively inexpensive. We often saw people loading up their groceries at the market into a taxi. Since we were without a car until ours arrived, we did use a taxi a few times if the distance was too great, the weather too wet, or if we were in a hurry.

At one point, we rented a car for a day to look at properties we might rent after leaving Montevideo. We paid about $100 for a tiny Geely that bottomed out on speed bumps and would begin to shake at 50 mph.

They have something like 57 different makes of cars here. Many Asian brands. Many that would not pass US safety standards. A familiar US car would be sold here under a different name.