El Chalten was created 30 years ago by the Argentine government. There was a land dispute between Argentina and Chile, both wanted this area. So Argentina sent people to live here, to claim it for Argentina. There are now 800 people who are residents of El Chalten. 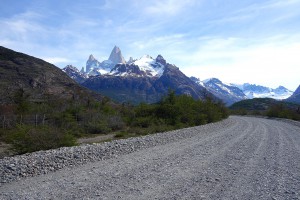 We were too tired to hike, so we decided to drive along the river . You are never far from a great view of Fitz Roy. 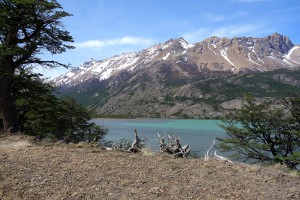 It is always surprising how blue the water can be. It is due to minerals in the earth. 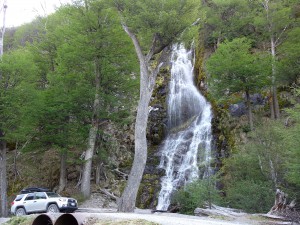 Numerous waterfalls cascade down the steep mountains. This one was right beside the road.

The road wound back and forth following the river. What started as a two-lane dirt road eventually narrowed to the point where only one car could drive.

Eventually, the road came to and end near some buildings. We vented the car for the dogs and set off through the woods following the river. We got a few odd looks from the two men we passed. Americans seem to dress a bit different with zip-off Colombia pants and visor hats. Fun fact: the logo on the label for Patagonia clothing is Mount Fitz Roy.

We did our best to follow a trail, but the signage was terrible. Eventually, we came to a quiet lake. We knew the other side of the lake was Chile. After resting a few minutes we retraced our steps. When we reached the buildings where we had started, again we got some strange looks and no answer to our “Buenos dias.” Whatever. 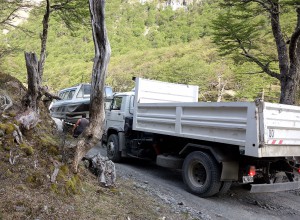 We drove back along the single lane road. Suddenly, the road was blocked with a huge boat. An equally huge truck was backing it down the road towards the buildings. With no where to go, we wedged our car up an embankment, leaving a few inches to spare.

Do Not Enter By military Order (in Spanish).

We had entered a restricted military facility. The building was used by border agents during the summer months. The property was for use by military personnel only. Oops! No wonder we got funny looks. The place was just gearing up, the boat was for use by the border guards. 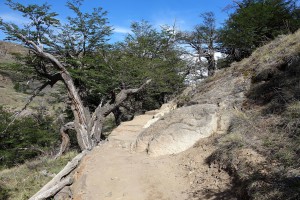 With only a couple days remaining, we massaged our sore legs and set off for Laguna Torre. This hike was even more grueling than the one to Laguna Capri. We climbed steep walkways, often taking steps that we 1 to 2 feet high. 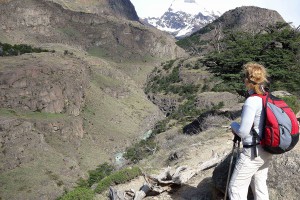 This first overlook gave us an idea of how far we had come. That river is far below. 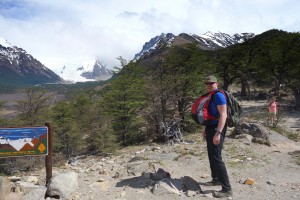 At this point I decided to hand my pack to Chris. It was the only way I was going to make it to Laguna Torre.

After a few more hours and lots of grumbling, we finally topped the top of a 100 foot tall pile of rocks, a terminal moraine. The stuff pushed up by the once advancing glacier. 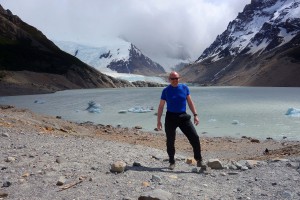 The hike was worth the pain. Though weather was turning, we caught occasional glimpses of mountains including Cerro Torre. The lake was breathtaking with a large glacier pouring into the far edge. Icebergs floated on the surface around the lake, occasionally rolling as they melted. Small avalanches created brown clouds as the side hills collapsed. 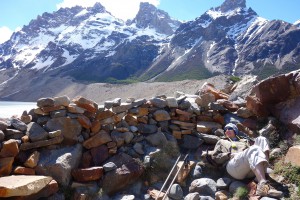 I was happy to rest behing a wind screen built from the rocks of the moriaine. I had gotten sweaty on the hike, but now the cold wind coming across the lake was freezing. huddled 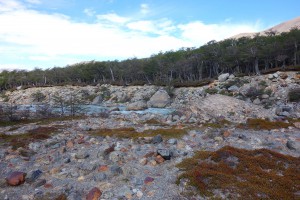 Last picture is of a river flowing from the lake through the rocks of the moraine. It was a long hike back. Luckily, days were long with the sun rising at 5 and setting at close to 9.

I have to mention, this tiny town has a number of wonderful restaurants. My all time favorite: Como Vaca. We ate here 3 times. They have the most delicious, thick, juicy, cooked-to-perfection, wood-grilled, melt-in-your-mouth beef and lamb steaks. I drool just thinking about it.