“Our car was supposed to be here, but it is not! We are tracking it….it had a detour in Sao Paulo, Brazil.  Still worried about customs. Hope shipping our car was the right decision. Seemed logical at the time: our own car, less expensive than buying or renting, could carry lots of stuff including 2 dogs. I wonder when it will arrive?” 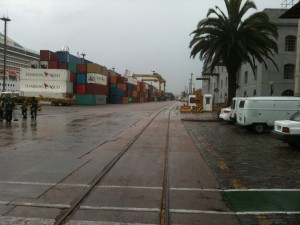 The stacks of containers waiting to be opened at the port. Our car is not in any of these.

The question we are asked most often is why we shipped our car to Uruguay. First, we had a dependable vehicle that was the right size to carry us, the dogs, and all of our stuff. Second, it is expensive to buy a car in Uruguay. Since tax is 100% on vehicles, a $40,000 car costs $80,000 here. Yes, you can sell it later (not without problems) for a good price, but you have to have the initial cash to layout: no car loans.

Next, let’s say we bought a car in Uruguay…. had title to it. We heard of people having problems taking it out of the country. Only a citizen of the country can do this. We talked to people who learned this the hard way. Obviously, the guy selling his car is not going to tell you that you cannot leave the country with the car. The list of reasons they can deny your crossing is too long; some as lame as they can’t reach the previous owner by phone at that moment.

A guy we met found himself stuck at the Argentinian border with a car he had just bought in Buenos Aries. He had title and all the paperwork, but they said he could not cross. He was smart enough to go to a tiny store close at the border. He charged the owner $1 for his car, and gave him title. The store owner then proceeded to drive the car across the border. Once they were across the border, the store owner gave back the title, hopped out of the car with $50 in hand, and walked back across the border. That is one way to do it. I hate to think of what might have happened if the guy would not give him the car back.

OR, you could sell your car near the border, cross by taxi or bus, then buy a car on the other side. Since we have 2 dogs, this was not an option. You would need to be traveling light. 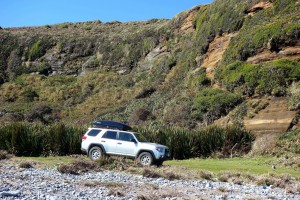 Feels like our car is still a long way away.

Why not rent a car? Besides the cost, you had the same issue crossing a border. Most rental companies will NOT let you drive their car out of the country of origin. I did a lot of researching before we left, yet much of this we did not know. We were continually happy with our decision to ship our car. There are hassles associated with what ever you chose.

We have had numerous offers to buy our car. We could actually make money. The problem is, it is not legal (tax evasion). Also, it would be a challenge to get that amount of money out of the country. There is a cap of $10,000 USD per person. One guy ended up in jail trying to sell his US car in South America. Too many horror stories! 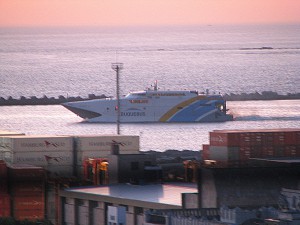 While we waited for our car to arrive, we considered taking this to Buenos Aries for the day. Ferries run multiple times each day.