This is not my usual idea for a DIDYA, but we were so impressed with the small town of Santa Cruz, that I felt the story needed to be told. It probably won’t be in the guide books.

Carlos Cardoen currently is considered an outlaw by the USA. He is also a winemaker in Chile who has done much good for the city of Santa Cruz. Here is a quick synopsis from what I have heard and read. I apologize if you feel I represent this incorrectly. I have my own thoughts about war and politics.

Carlos Cardoen grew up in the Colchagua Valley in Santa Cruz, Chile. He did very well in school and was offered a scholarship to the Univercity of Utah where he graduated with a doctorate in engineering. He returned to Chile to start and run a small mining-explosives company. This was in the 1960’s.

In 1973, Chile was taken over by a military coup lead by General Pinochet. Worried that the resulting instability of the country made it susceptible to advances from neighboring Argentina and Peru, Pinochet wanted to increase Chile’s supply of weapons. Up until 1976, the US had sold the needed weapons to Chile. However, in 1976 the US enacted a law prohibiting the sale of weapons to countries considered to be human rights violators. Pinochet was definitely on the list of violators. However, it did not change the fact that Chile needed to feel confident they would be able to stop an invasion from another country. This was not an imaginary threat. Border clashes have been an ongoing problem, even in recent times. Since they could no longer buy weapons from the US, Chile needed a different source.

They approached Carlos Cardoen and asked him to make bombs instead of mining explosives. Whether it was for duty, money, or both, he agreed. By the 1980’s, Cardoen’s company was Chile’s largest defense company, thus breaking its dependency on the US. Cardoen’s company is best known for developing a devastating cluster bomb in 1984. From 1984 to 1988, they sold millions of $ worth to Iraq. This is where it gets interesting.

In the 1980’s, Cardoen’s company did trade shows in the USA that were attended by US military. According to Cardoen, the US knew and supported his arms sales to Iraq. This makes sense when you look at what was going on. The US did not like Iran. Recently in Tehran, Iran had taken American hostages at the US Embassy. Keep in mind, the US still took no official stand.

In 1982, Iraq invaded Iran. US goods flowed into Iraq (to Saddam Hussein) to build up Iraq and help Iraq counter Iran. Billions of $ of US equipment and technology went to Iraq. Cardoen was not alone in selling to Iraq. The USA, France, Germany, the UK, and others countries were selling all sorts of stuff to Iraq including missiles and nuclear reactors.

Then in 1990, Iraq invaded Kuwait (the Gulf War). The UN ordered a trade boycott against Iraq. The US started bombing Iraq in 1991. Suddenly, Cardoen was on wrong side. The weapons plants he had built in Iraq in 1980 (with knowledge and acceptance of the US), became targets. His cluster bomb was now used by the Iraqis against the US and other NATO countries. Suddenly, people wanted to know how Iraq got these lethal weapons. The blame game had begun.

The Gulf war ended in 1991. Now the question of arms sales to Iraq prompted a major government investigation. The question was, “Did companies illegally obtain export licenses to ship weapons-related goods to Iraq before the war?” After much finger pointing and “he said, she said…” Cardoen was found guilty. He had shipped a specific bomb-making ingredient to Iraq, an ingredient that was now being scrutinized by the investigation. A Former CIA operative strongly stated on Nightline that Robert Gates (Bush’s nominee for CIA Director) had met with Cardoen and personally supervised shipments of this specific bomb-making ingredient.  However, Gates now denied he had met with Cardoen. Cardoen restated that Bush knew about sales, he felt he was just a scapegoat. Others who were in-the-know tried to speak up, but they received threats and eventually went quiet.

The US made a big show of placing blame for the atrocities of weapons and war away from the US. In the end, the only one sentenced was a minor employee in one of Cardoen’s many companies. He was sentenced to serve a few years in prison.

OK, end of the story.

Now, jump ahead 10 years. In 1992, Cardoen went into the wine business. He bought Vina Tarapaca in his home town of Santa Cruz, Chile. 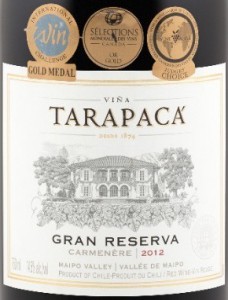 But the question of who was responsible for arms sales to Iraq did not end for Cardoen. The US is still hunting him. The US says it will arrest Cordoen if he sets foot in the US. They have spread the word that if he goes to any country with a favorable extradition treaty, they want him. He is no longer free to travel to many parts of the world. In addition, Citi Bank and others have been instructed not to do business with him.

OK . . . it is just my gut feeling, but I think this whole thing stinks. First, it began when Chile established their own defense, no longer needing to depend on the US. Thus, the US no longer held political control of Chile. Second, history shows the US has armed a number of countries when they were seeking political clout. That is just politics. So . . . enough of deflecting blame.

It is now 30 plus years since Cordoen sold weapons to Iraq. How many countries has the US sold to? Perhaps mistakes were made. I would like to see the end to all wars. But placing blame later is ridiculous. We can always look back and see how things might have been done differently.

Whatever you believe, Cordoen has made Santa Cruz a destination sought out by tourists. The Colchagua valley is often compared to Napa Valley. Cardoen’s winery produces truly delicious wines. He opened a beautiful, upscale, Spanish colonial hotel with a spa, beautiful gardens and a restaurant. Cardoen has refurbished many historic homes in the area. He created a scenic railway through the valley and a respectable museum.