“We awoke to snow . . .  it was a cold night in the car. Had to start the heater a few times. Headed north. Caleta Tortel is the farthest south we will go in Chile. The drive was breath-taking. Never knew there were that many shades of blue! “ 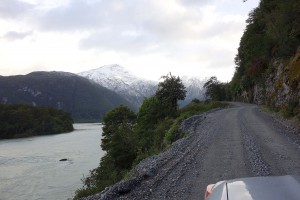 After thawing enough to move, we headed north on the Carretera Austral. We carefully drove the winding dirt road. We had to watch for washouts and falling rocks. There seemed to be more after it rained. Some areas reduced the road to a single lane. A single lane with a mountain of falling rock to our right and a sheer drop off to our left. Throw in a couple of locals who barreled around the blind curves: made for a tense drive. 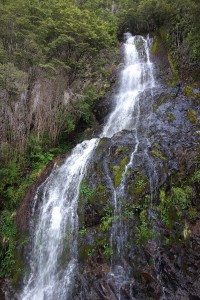 Dozens of waterfalls cascaded down the mountain side on our right. 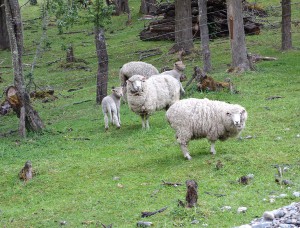 Ewes with lambs only a few hours old scampered across the road.

Since there were no gas stations in Caleta Tortel, we stopped in nearby Cochrane, a charming hamlet on the water. We realized we had missed our turn when we dead-ended at the river. A friendly, toothless gentleman shook his head (dumb tourists) and pointed up the hill. 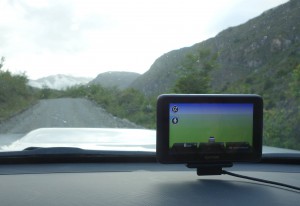 According to TomTom, this road does not exist.

We passed the entrance to the private nature preserve, Parque Pumalin. This land (715,000 acres) is owned by an American named  Doug Tompkins. This is one of the largest and most diverse conservation efforts in South America. It is the largest private park in Chile. In fact, it is one of the largest private parks in the world. I would guess there are mixed feeling about this. The good news: the park’s roads, trails, campgrounds, and visitor centers are well-maintained. It was closed for a period due to the eruption of Volcan Chaiten. We will be visiting that volcano soon. 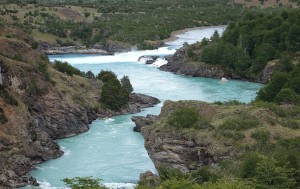 The rest of this post features pictures of the blue waters. 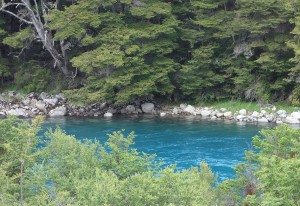 I need a big box of crayons to name the different shades of blue. 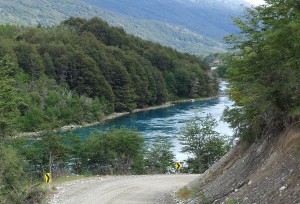 This is the actual color of the water – no photoshop. 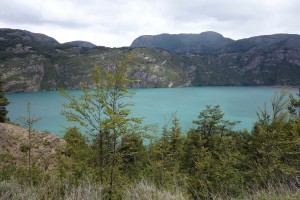 Another lake, another shade of blue. 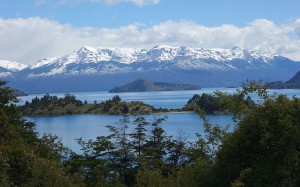 Our maps were limited. We knew we had to find the turn to the only bridge that would connect us to the road that continued north. 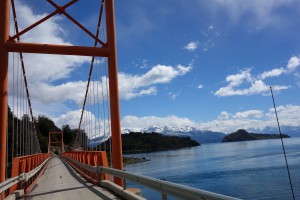 I guess bright orange is a good color to let you know you have found the bridge. 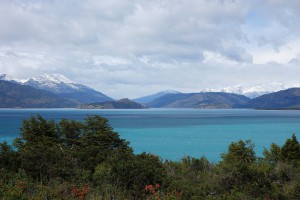 The Lago General Carrera was outstanding. A number of rivers ran into this lake. Each river had a unique shade of blue. Once they reached the lake, the separate colors slowly melded together. You can look across the lake and see at least three shades of blue.

At Lago General Carrera, we drove through the town of Puerto Rio Tranquilo. This is where you can hire a small boat to take you out to Catedral y Capillas de Marmol, or The Marble Cathedral. The wave action has eroded the marble, creating caves and grottos. The white marble reflects the turquoise water.  We had to pass since we had no secure place to leave our loaded car and dogs.