December 16, 2012  “
“Yea! Good news – our car has arrived. Bad news – there may be a problem getting it through the port. We have already talked with our agent 6 times today.” 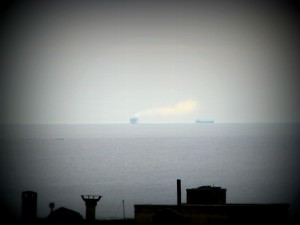 We tracked our cargo ship…it has arrived! BUT…customs won’t release our car! We could actually see it from our apartment.

We tracked our car on http://marinetraffic.com and saw the cargo ship pull into port …a week late. Now, the fun began. Chris had spent weeks running around town trying to find an agent/broker to represent us through customs. It turned out shipping a car to Uruguay without being or becoming a resident was VERY rare. All cars coming into Uruguay are charged a 100% tax. We argued that we were not held to this tax since we were leaving in a few months, never to return. We said “treat it like we are driving through.” Our first agent lasted a week before he dropped us saying it could not be done.

The problem was: the agent had to guarantee that we would leave the country with the vehicle by the end of the time period allowed by our visa.. If the vehicle did not leave, the agent would owe over $40,000 USD (US Dollars) to the government of Uruguay. No wonder no one wanted to represent us.

Chris literally ran all over Montevideo. First, to find an agent. The agent he found was from a large agency; I guess they could absorb the cost if our vehicle did not leave the country in time. Next, he had to go to numerous places scattered all over town, paying fees, getting required stamps, and buying SOAT,car insurance. Our agent very nicely offered to have a man meet us at the border to escort us across. Instead, we sent them an email as soon as we crossed with a scanned Argentina entry document attached.

The late arrival in port created more problems. We now were approaching the holiday season. The port was only open 3 days of the next 14 days and there was a back log of people already trying to get their stuff through customs.