“We stopped at a small café for ice cream. Pointed to a picture of the largest bowl of ice cream. We were handed a small cup, but the price seemed really high. We know that pictures are not necessarily representative, so we accepted it. Also, our Spanish still sucked.

The next day, we passed by the same ice cream place as a “local” man ordered the same thing we had, but… he received a large bowl. We told the guy what had happened. He explained it is common to charge North Americans more since we are all wealthy, thus it is called “the American Rate.” Bugger! We are Americans, but we are not wealthy.”

Charging the “American Rate” is an accepted practice of charging foreigners, usually North Americans, a higher rate. This did not happen all the time, but enough that it had us frustrated. It is not due to bad relations. In fact, relations are good between the US and Uruguay. Overall, the Uruguayans were glad to have Obama as our president since they had disliked Bush. We would not be considered wealthy in the US, but we realized we are most likely wealthier than many of the Uruguayans. 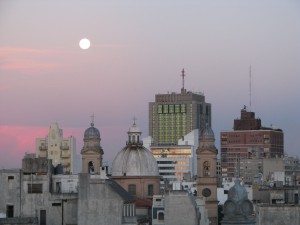 This picture has nothing to do with the post – I just love this view of the moon over Montevideo.

The American Rate was not just on small items. Friends (from Texas) found a house in Piriapolis that they wanted to buy: just up the coast, 62 miles east of Montevideo. The seller was asking $120,000 USD (US Dollars). It is common to ask for US Dollars. They offered him the full price. The owner said it would cost them $240,000 USD. This was not a negotiation point. He would not go a dollar below the $240,000. The seller actually passed on the sale rather than selling for his original asking price. We could question that perhaps he did not like them or North Americans in general, but we heard of this happening a number of times. It became common to stand in line and pay a different rate than the person before or after us. Uruguay was our learning ground and it turned out to be the most blatant country in SA at charging a different rate to foreigners. Yet, it was always done with a smile.  And as we stayed in the same place long enough to become a regular customer, we began to be charged more like a local. 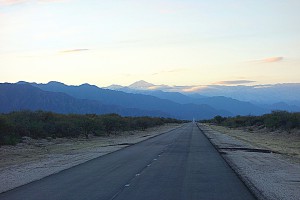 We have a long way to go.