“Spent a day just driving. I LOVE having a car. So many places would be missed without it. The people continue to impress us with their welcoming attitude.”

We headed north out of Salta for a long day of sightseeing. 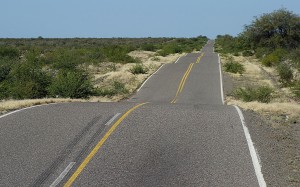 This stretch of road definitely conformed to the landscape. 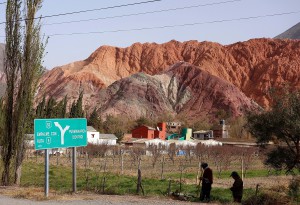 We took a brief picture stop at the small town of Purmamarca. This town is known for it’s colorful rock backdrop. I wonder if the inhabitants appreciate the intense lines of color. 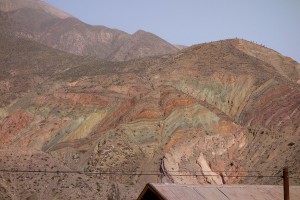 Just outside of Purmamarca we found more striped rock. This area is a favorite with camera-toting tourists. 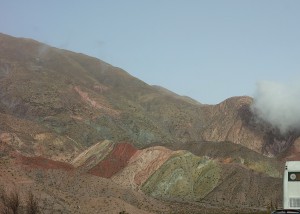 The colors come from the different minerals in the rock. Each vibrant layer laid down at a different point in the earth’s history. 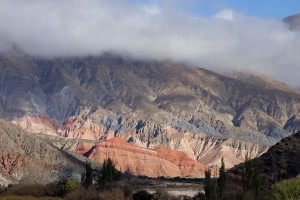 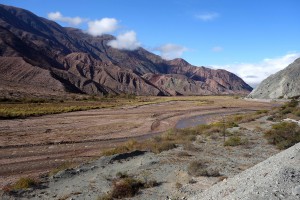 We followed the shifting river, each bend granting us a different multi-colored vista.

The next town we came to was Tilcara. Home to 6,800 indigenous people. We stopped for tea, more precisely, coca leaf tea. I had heard about it. I can’t say that I could feel any difference from drinking it. Various people will warn you about buying coca leaves and taking them with you to another town or across the border. Bad idea. It is common but not considered legal by many officials. You will be at the mercy of the police or military that finds it. 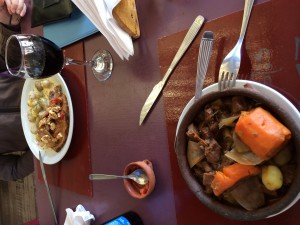 The tea did not warm me up, so we went shopping in the center plaza. The plaza was loaded with stands, each selling brightly colored apparel. I found a bright blue llama sweater.

Now that I was warm, we decided to have lunch. Many restaurants in Tilcara have llama on the menu. We tried two different preparations: both were good. Llama tastes a little gamier than  beef and I think it is a bit tougher. 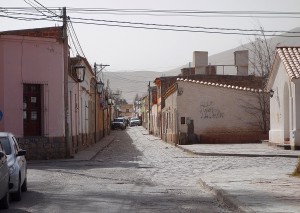 Eventually, we came to Humahuaca. This town was recently part of Bolivia. This is the closest we got to the Bolivian border that day, about an hour and a half away. Humahuaca is home to about 12,000 people, most of them of native descent. The town is known for it’s narrow, cobbled streets and adobe buildings. 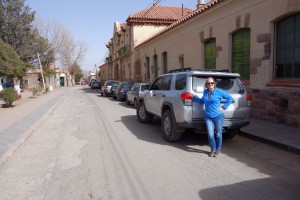 Me in Humahuaca wearing my new blue llama sweater I just bought in Tilcara. 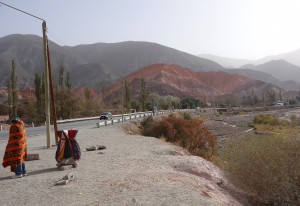 On the outskirts of towns and at rest areas, it was commonplace to find people selling local crafts. Or, providing a photo op with some brightly decorated llamas. Sometimes, the vendor was dressed in traditional garb and would stand in the picture for an additional fee. 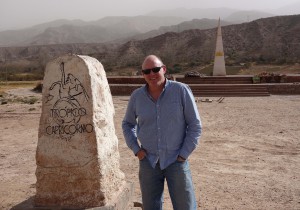 We passed the Tropic of Capricorn. Remember Iguazu Falls? We are basically at the same latitude as we were at Iguazu Falls …only farther west.

We continued to feel Argentina is filled with the friendliest and happiest people. We had been warned that we would not like Argentina due to the Argentinians. Even a few guide books warn you that Argentina is an unfriendly place; we actually expected some negative attitude due to the poor financial situation in Argentina. Or, the books said the negative reputation was earned from the attitude of the Porteñas, the people from Buenos Aires. But, we have met many travelers from Buenos Aires and they were always quite friendly. Even after spending many months in Argentina, we love the people. We literally could count on one hand the times we had met with an unfriendly waitress, gas station attendant, or store employee. Funny, due to all the negativity we had heard, we had only planned to stay in Argentina for a short time. But . . . we came here, fell in love and stayed for months, returned for 3 more months, and eventually returned for our current long stay.