“Chris does ALL the driving. I have not driven even one block in South America…and I do not plan to.  I have said many times “I’m glad you are doing the driving” and I mean it…the drivers here are crazy. Chris loves it…it’s all his.”
Chris literally does ALL the driving. I lost the feeling in my feet from the chemo and chose not to drive in a foreign country. So when we do these long drives, Chris is behind the wheel the entire time. Luckily, Chris loves to drive. I am the navigator. I would read more, but I get car sick.

Since South American drivers are crazy and road rules are lax, it is good Chris is not intimidated easily. Chris has a great sense of direction (perhaps from his days of ski racing), he is fearless and very aggressive. Meanwhile, his passenger needs tranquillizers.

Many roads — both in and out of town — are 4 lanes wide, but have no set lanes, lines are ignored or as we joke, “just suggestions.”

You need to be alert to lane changers darting without looking. The locals are often more aggressive.

In town, if there are no parking spaces available, it is common to see a car stop in the street, the driver runs into a store for a few minutes, leaving the car in the traffic lane. Traffic must use a single lane for both directions of traffic. Remember, I said this is common . . . we probably see it every time we go out. This is a good time to practice patience. Tranquilo!

With all this crazy driving, we were amazed to see very few accidents. You will see an occasional car with a dent, but not as many as I would have thought.

In Cordoba, pedestrians crossing a busy street, race to the center of the street and stand between two cement cones. We joked that if the women were “busty,” we would have to pull in the side mirror. 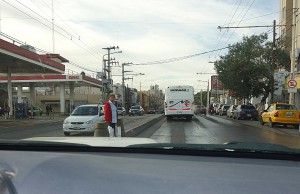 The lady with her large bags barely fit between the cement pillars.

Driving is one of the biggest challenges you face on a road trip. This is not the only continent like this. We encountered similar driving/drivers in Italy. It is a serious consideration when planning a trip. 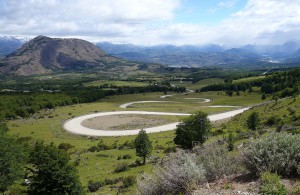 Chris is an aggressive driver who actually thrives on some of this driving. He particularly loved the “twisties” in the mountains. He drove every kind of road from very rough and rocky dirt roads that clung to the side of a mountain (in some places part of the road had washed away) to incredibly smooth paved roads you could roller blade on. I think you could drive a sedan through much of South America, but there are roads where I would not venture without 4-wheel drive and very puncture-resistant tires. Even then, some roads were debatable. I was confident in Chris’ driving, but I worried about the other drivers. Odds are, we would be found at fault since we appear more able to pay for repairs. No wonder I kept my eyes closed. 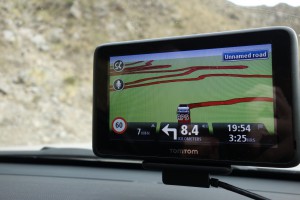 “Twisties” as seen by TomTom

If you are driving, know this:

In many areas people pull to the right if they want to turn left. They wait on the shoulder (if there is one) until they can cross both lanes of traffic. They may wait awhile as people are not eager to stop.

There is no right on red in South America. 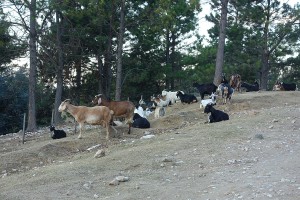 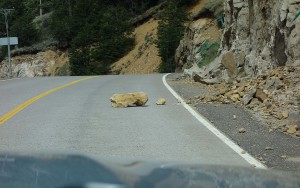 People will walk along the edge of the road – in the dark – wearing black with nothing reflective on them!

People will pass, staying in the oncoming lane until the last moment – really freaks you out to have them driving straight at you.

Headlights: most countries require you drive with lights on ALL the time.