July 23, 2013
“Snow!  Hard to believe we were in 70 degree temps just a few days ago. Las Leñas doesn’t look very big, must be more on the other side of the mountain.
We checked into the world’s smallest room. Took a bit of jigsaw puzzling to fit us, two dogs, and all of our stuff into the room. We don’t want to leave stuff in the car while we ski.
Already met some nice people from Buenos Aires.”
Las Leñas is one of the major Andean ski resorts in Argentina. Two others are Chapelco in San Martin de los Andes and Catedral in San Carlos de Bariloche. Since Las Leñas was the highest in elevation, it’s thought to have the best snow and powder of the three ski areas and a good diversity of runs ranging from green to black . . . something for every ability. 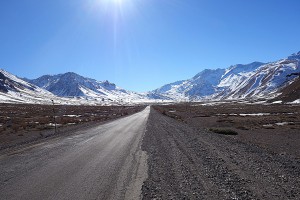 We loved driving into this area. It was still dry, but the snow capped mountains brightened the picture.

We drove to a place called Los Molles. Instead of a town, we found just a couple hotels. Our room was incredibly tiny . . . about 8 by 10 feet. (There were rooms that held 4, 6 or 8 people, but it turns out it was the same size room, just more bunk beds). Los Molles is roughly 1/2 way between the Las Leñas ski area and the town of Malargüe. 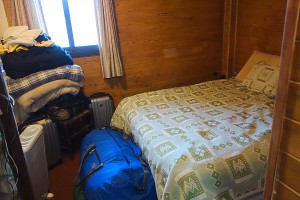 We literally had a two foot space between the wall and the side of our bed and a whopping 4 feet of the end. Very cozy! Into this space we needed to fit ALL our stuff AND two dogs. We kept them quiet the first few days since we were not sure we had mentioned them when making the reservation.

The closest town, Malargüe, is about 95 kilometers from Las Leñas. It took us about 45 minutes to drive into town. In Malargüe, we rented our skies, boots, and poles. Near Malargue is a park with about 700 dinosaur tracks. We heard about it too late, so we missed seeing it.

Our lodging was the first place we had booked that had no kitchen facilities. Breakfast and dinner were provided in the price. Breakfast was basic, but came with fresh-squeezed orange juice. Dinner was surprisingly great. You don’t expect that when it is included with the room. Dinner began with a starter (soup, salad, etc), then the main meal (always with wonderful presentation), and ended with dessert. We never went hungry, however, we did have to adjust to diinner being served at 9 pm. We used the deep window sill in our room as our mini refrigerator to keep the snacks that held us over until dinner was served. 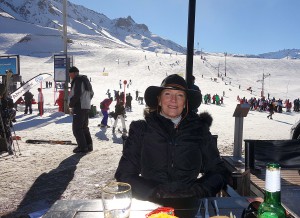 After renting our equipment, we drove to the hill for a look. The dogs joined us at the base for a quick bite to eat.Turns out that would be the most snow we would see. It was late in the day so we decided to hit the slopes the next day. 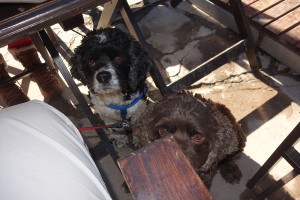 The next day, we got the feel of our skies (it had been a few years) and chose our runs. 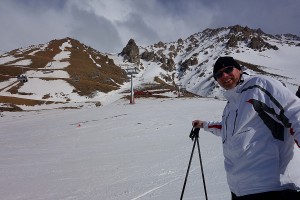 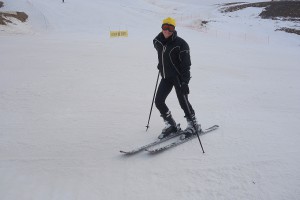 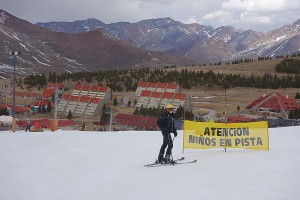 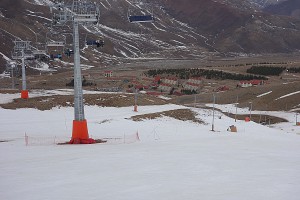 That is the upscale, ski-in/ski-out lodging.

Within no time it started to rain…not snow…rain. We plowed through slush for a few runs, but the snow dwindled fast. 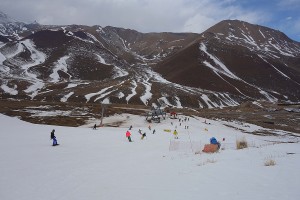 The lower runs were getting pretty rocky. We were glad to be on rental skies. After a couple hours, we called it quits. It is hard to ski when the grass is showing and rocks pop up in the middle of the run. That was the best snow day we had during the 10 days here. Always hopeful, we continued to try skiing in the mornings until the sun melted the man-made snow. 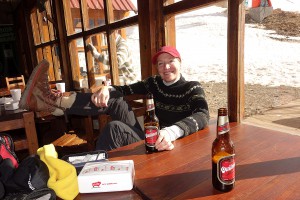 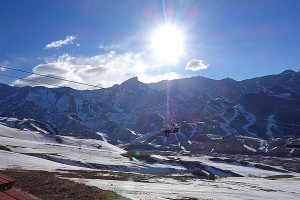 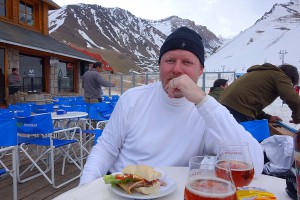 Lunching on the hill and people watching is a good alternative to skiing. 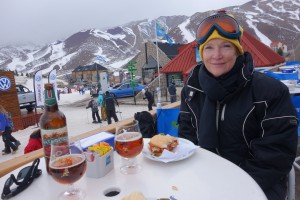 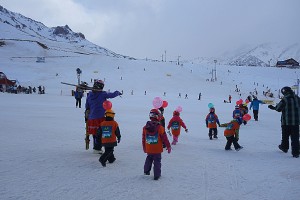 What a great idea . . . balloons on their helmets!

Since we had prepaid for our lodging, we decided to stay the entire 10 days. A few days we skipped trying to ski and instead chose to stay in our tiny room. However, we found out that the water in our hotel was shut off from 11 am until 4:30 pm. Even worse, when the water was turned back on, what came out of the faucets was very brown. It never improved during our stay. We assumed that the drought was so bad that they were sucking from the bottom of the well. My white ski socks became a permeant gray after one washing. It made us wonder just how clean we got in the shower and gave a whole new meaning to dishwater blonde. 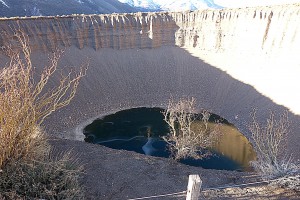 During the drive to the ski area, we found a giant sink hole.  . 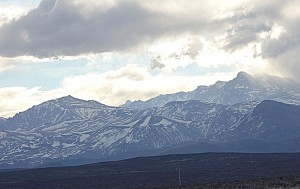 Not much snow left at Las Lenas. 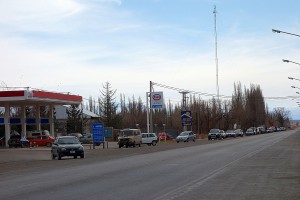 Then it was time to head further down the Andes.

We packed up and started our drive to San Martin de los Andes (San Martin for short). 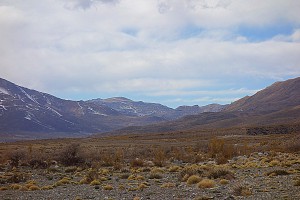 Not much snow, but the drive was still beautiful. 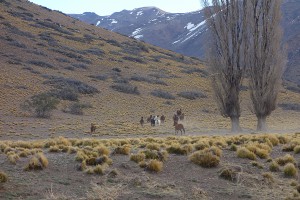 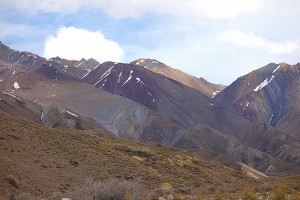 And the colored layers of the earth.