Roadside shrines are a common sight throughout South America. There are hundreds if not thousands of them. They ranged from simple to very elaborate.

South America is predominantly Catholic which may be one of the reasons you see so many roadside shrines. However, the two most common shrines were to local saints not recognized by the Vatican. 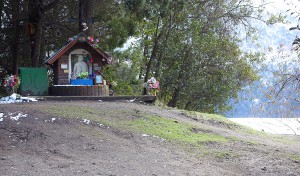 That being said, there were a number of shrines dedicated to someone who had died, perhaps in an accident. An individual can show their devotion by erecting a small house next to the road. Some of these shrines will have a picture of the person it is dedicated to.
The first roadside shrines we saw were in Uruguay.  They look like small A-frame houses next to the road. Some sites had multiple small houses. 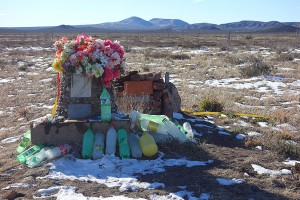 These were dedicated to a lady called Difunta Correa. The story we heard was that over 100 years ago, this lady decided to cross the desert with her baby. The lady dies, but miraculously the baby continued to nurse. When they were eventually found, the baby was still alive: A miracle! Now people stop at her shrines to ask for help reaching their goals. They leave water as thanks. It was common to see hundreds of plastic 2 liter bottles filled with water nestled around the shrine. Many had flowers, sometimes fresh. Occasionally there were candles, but we most often saw them at the larger shrines that were dedicated to a recognized saint.

We did not stop at many. Usually by the time you saw them, you were flying by them. 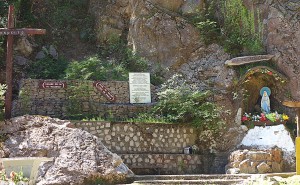 We did stop at one huge shrine dedicated to a saint. There was a large statue and cross. Close by was a building packed with fresh flowers, candles, and notes.

Occasionally we saw people stop and make the sign of the cross, say a few words, and then go on. Perhaps hoping for a miracle or just for comfort. 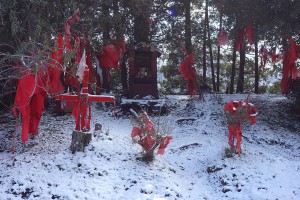 In Argentina, the shrine was often painted red and the site would have numerous scraps of red fabric hanging around it. These shrines were dedicated to Antonio Mamerto Gil Nunez, known as Gauchito Gil. He was the Robin Hood of Argentina. The story goes that he was a war hero, but eventually a deserter. He stole cattle from the wealthy and gave them to the poor (Argentina has a large gap between wealthy and poor). 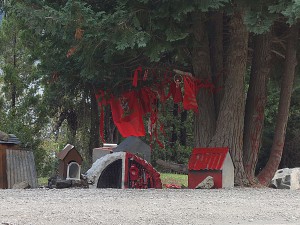 Even though the peasants protected him, he was caught and sentenced to die. He told his executioner that if he was given a proper burial, the executioner’s gravely ill son would live. He was executed, not buried properly, and the executioner’s son got worse. Gil was reburied properly, and the son recovered. A folk saint was born. The red color of the shrine signifies the red poncho of the gaucho and his red bandana.