July 22, 2013
“Said good bye to “The Butterflies” and hit the road. Instead of heading southeast to Puerto Madryn (as initially planned), we have decided to go skiing. We are heading southwest to the Andes. There are 3 ski areas we hope to visit.” 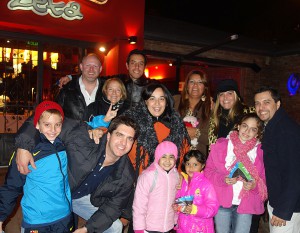 The “Butterflies”, family and friends.

Alejandro, our building manager, became our good friend. One night, he invited us to join him, his family, and some friends for dinner. Our social director and friends became “The Butterflies.”

Friends like this made it hard to leave. We continue to keep in touch with “The Butterflies” and are hoping to see them again in a few months!

After a month in a big city, it is time to see more of Argentina. We had planned to go southeast to Puerto Madryn, but we felt the pull of the Andes…ski season. If we drove directly there, we would arrive in time for the second half of the season. We hit the road for an 11 hour drive…next stop: Los Molles and the ski area of Las Leñas. 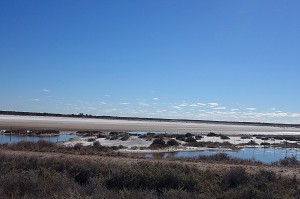 For a part of the drive, it looked like snow or ice on the land and water. It was salt! Pretty inhospitable.

The roads were decent, but it was slow going through numerous small towns. Most of them have  speed bumps affectionately known as “sleeping policemen.” Speed bumps are used far more frequently in South America than we are used to in the USA. Some speed bumps have signs, however, many do not. There was one bump on the way into Iguazu Falls that was in the shadows: no signs and unpainted. The first time we hit it everything went flying. We memorized that one pretty fast. 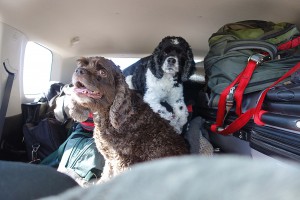 The red straps held the bags to one side.

We added more straps to our luggage to hold it to one side. On our last big move, the stack fell over scaring the dogs. They were not hurt. Yet from that time forward, it seemed as thought they were eying the stack of bags waiting for it to fall again.

After 2 months of traveling around central Argentina, we realized that much of the land was very dry. We drove through mile after mile of sparsely-populated, parched-looking land. It was hard to imagine much living in the Pampas around Cordoba with its old lava rock. The only vegetation looked brown and yellow, but apparently this is good land for cattle. Though much of the land seemed barren and colorless, it was also captivating. I wish I knew more about the geology of this area and what made up the different layers of rock. It was a visual picture into the past. 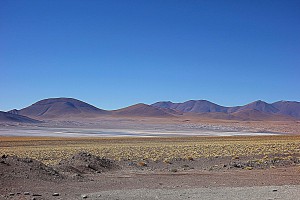 We now considered buying a gas can. It was not uncommon to find a station out of gas. Also, many gas stations only had diesel, no gasoline (“nafta”). Diesels are more common here.

Note: Bring your own toilet paper. Most gas stations do not have any. 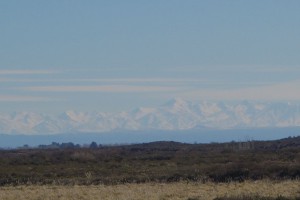 Our first glimpse of the Andes, they appeared like ghosts.

The Andes are the tallest mountain range in the western hemisphere. They are also the longest continental mountain range in the world. The Andes stretch 4300 miles from Argentina and Chile, to Bolivia and Peru, to Ecuador, to Colombia, and ending in Venezuela. We learned it is part of what is known as The Ring of Fire, an area around the Pacific Ocean with lots of volcanic activity. Two of the earth’s plates come together, one plate gets pushed up and the other gets shoved under. This produces earthquakes and volcanic activity.

This activity is one of the reasons this area is so rich in minerals. Large amounts of gold and silver were used by the Incan and Mayan civilizations. Unfortunately, that attracted the attention of the conquistadors. Besides gold and silver, this area is also rich in copper, lithium, and tin.

Our destination is Los Molles. Not really even a town, just a collection of shops and hotels providing services to the ski area of Las Leñas.  The closest town is Malargüe, about 40 minutes from Los Molles. Just before arriving at Los Molles, we joined the famous Ruta (Route) 40. This road runs north and south through Argentina. We even passed the place where Butch Cassidy and Sundance had a home. 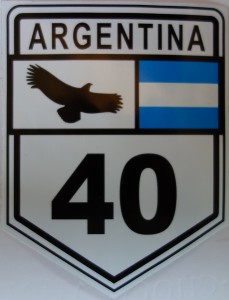