“We climbed the volcano today. I have never been so tired. I thought the glacier was bad. That was a pleasure walk.“

If you have never witnessed first-hand the devastation from a volcanic eruption, it is hard to describe.
The village of Chaitén was once a busy fishing community of 5000 residents. It now has less than 1300 individuals. The government tried to move the entire town, but they were met with resistance. Some stalwart individuals like Horacio and Javier faced the challenge. They dug out, made repairs, and waited for electricity and water; but basically, they made due without. They should feel great pride in their strength. 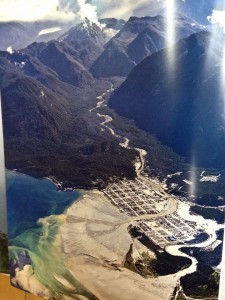 In May of 2008, Volcán Chaitén, just 6 miles from town, erupted with little warning. Spewing vast amounts of ash into the air. The pyroclastic flow hit the town within minutes. It barreled down the mountain, leveling everything in its path, scouring the mountainside of trees. Rain fell, adding volume to the river of ash and debris. At first, the river followed its original course, reaching the bay, and filling it with silt. Then, an earthen dam in the mountains that held back a large amount of water broke. The water hit the bridge in town where it backed up. The debris forced a change in the  course of the river (you can see in the picture).  Instead, it flowed through the center of town, destroying everything in its path. It added even more silt to the bay, ending the fishing economy.
A month later when eruptions had ceased, the landscape had been drastically altered. Much of town was buried with fallen ash. Worse, where ash and water mixed, it basically turned into cement. The tide of ash and debris knocked buildings off their foundations, making homes uninhabitable. Not only homes were destroyed, but roads, bridges, and businesses. The bay was a sandbar, no more a port for fishing vessels. A smaller port was opened just north of town where the ferry could stop. Livestock was killed, but fortunately no people.
Nearby towns towns were buried with falling ash. They had to dig out too, but it was easier since the water had not hardened the ash.
People intent on renewing the economy, came up with an idea to encourage tourists to hike the still steaming volcano. They set to work making a couple paths up the mountain, adding an occasional bench to rest on. This was a monumental task. 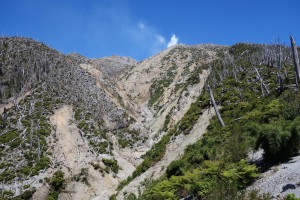 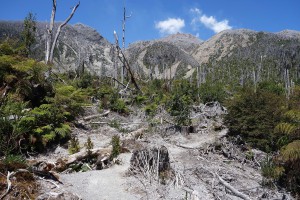 This was the start. Not much of a path.

We knew this would be a difficult hike. We arrived at the pull-off pointed out on a map by Horacio. It was hard to tell  there was a “trail” there. There were a few small markers, but most were difficult to find. We pushed on in one general direction. Solid parts of the path had ash that had been tamped down into hard surface. Parts of this path were made more difficult with loose gravel. It was fun to find some glistening chips of obsidian scattered along the path.

Most of our climb was in the green area on the right. 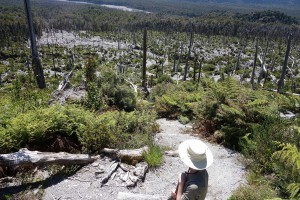 It was a difficult trek. We made walking sticks from tree branches. I used this to leverage myself up 2 foot steps, to maneuver over fallen tree trunks and around boulders, and to use while baby stepping down newly made river banks cut through the fallen ash. 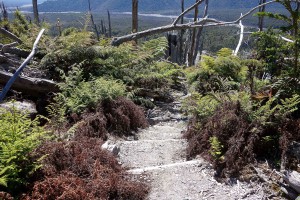 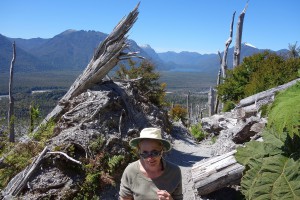 The trees were stripped of leaves and bark by the pyroclastic blast. Only ghosts of large old trees poked into the sky. New green plants emerged, stubby bushes had grown back. 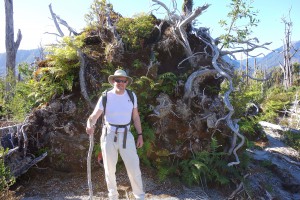 This large up-rooted tree provided shelves of soil for ferns to root, life was returning.
At the top was a crater with a dome in the center. You cannot enter this area due to gases emitted from the volcano. 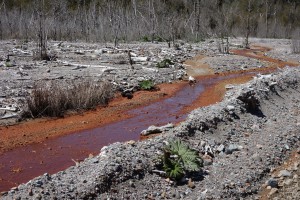 Blood river? We noticed a few red rivers snaking along the base of the volcano. The red was probably due to iron in the soil. It just felt creepy amidst all the devastation.

Much of the town of Chaitén was partially sticking out of banks of ash. 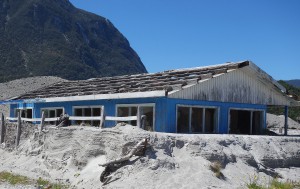 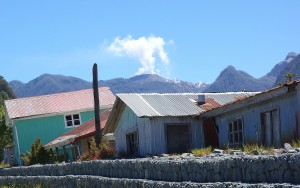 Often pushing them off of their foundations. 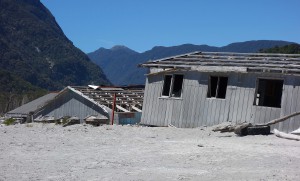 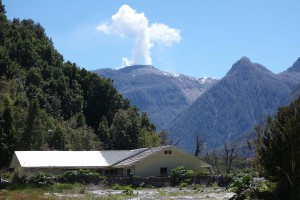 The Volcán Chaitén can be seen behind this home buried up to its windows. 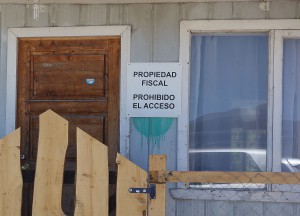 Our week flew by. Before leaving the town of Coyhaiqué, we had booked a ferry ride from Chaitén to the island of Chiloé. As often happens, the schedule changed. We learned of the change when we stopped by the office in Chaitén to check departure times. Horacio was able to let us stay another night.